Audi leads at the halfway point of dramatic Le Mans

Audi leads at the halfway point of dramatic Le Mans 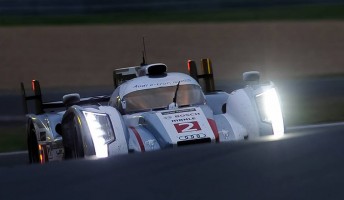 Audi holds the upper hand as the Le Mans 24 Hour enters it’s second half after a dramatic opening 12 hours.

The early race incident that claimed the life of regular Australian visitor, Allan Simonsen has cast a pall across the 56 car field, however the battle up front has been spirited.

A number of Safety Cars have punctuated the event as it swung deep into the night – many to clear up debris on the racetrack. Coming up to the halfway point, a lengthy Safety Car was triggered when the HVM Status GP left the road at incredibly high speed on the exit of the Porsche Curves. Running in LMP2, the machine was destroyed in the incident, however the driver, Tony Burgess (Canada) was able to emerge under his own steam.

Although a lap behind the Kristensen/McNish/Duval Audi, the Toyotas have been running strongly and are poised to pounce should the number 2 machine sustain any of the problems it’s team-mates have encountered.

The #1 Audi suffered a motor generator problem in the seventh hour, necessitating almost 45 minutes in the pits to repair and get back into the fray. Benoit Treluyer first struck problems leaving pitlane, losing half a minute to the field.

Worse was to come when he went back on track only to have the German machine force him to complete the 13.6 kilometre lap and steer back into the garage. Jason Bright goes past the packed Dunlop grandstand at night

Whilst the team was dealing with last year’s winner, it was further compounded when the number 3 machine toured in after contact out on the course with Oliver Jarvis at the wheel. A tyre had been sheared in the incident.

The #3 car was able to re-join and currently sits fourth, two laps down, whilst the #1 Audi is charging its way forward in 10th placing overall some 10 laps behind the leader.

Toyota hasn’t been without it’s dramas, the #7 machine that is piloted by Kazuki Nakajima suffered a fuel pressure problem and electrical problem but maintains a place in the top three.

Early in the race, it appeared as though Audi and Toyota were going to go toe-to-toe for the full distance, the Japanese machines quickly getting themselves into a position to challenge for the lead. As time wore down however, Audi asserted its dominance on the pair, however the two marque battle is far from over.

In the battle for the first non-factory LMP1 machine to cross the line, the Strakka Racing car has been taking the fight right up to the pair of Rebellion Racing Lolas.

In the hotly contested LMP2 category, it is an OAK Racing one and two, with the sister car to the Olivier Pla pole setting #24 getting in front of its team-mate. 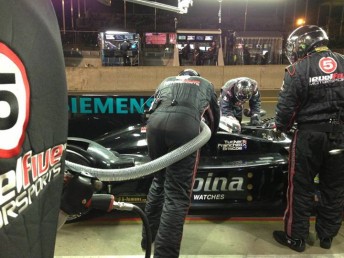 The Briscoe car gets some more juice

Aston Martin – who elected to continue on at the request of the Simonsen family – have been running first and second in GTE-Pro for much of the race, however they are embroiled in a battle with the pair of Manthey Porsches. Currently one of the Porsches splits the Astons.

In GTE-Am, the Matmut Porsche leads the way from the AF Corse Ferrari. For much of the early stanza, the Dempsey Del Piero Racing Porsche driven by Gray’s Anatomy star, Patrick Dempsey led the way. A huge presence of cameras surrounded the car when Dempsey got in for his first night session, replacing Porsche factory driver, Patrick Long who put in a stirring stint.

John Martin was leading the LMP2 category by over 50 seconds before a lengthy pitstop during the ninth hour saw him lose two laps. He is now running seventh in the P2 class, 14th overall.

It’s been a similarly difficult race for Ryan Briscoe also in the P2 category. The Australian’s Level 5 Motorsports car that he’s sharing with owner, Scott Tucker and Marino Franchitti has caught fire in pitlane. Prior to that, the team was forced to change the rear end in the car which in total has cost them a number of laps.

With 12hr 15m remaining, Franchitti stopped the #33 out on track in a shower of smoke, he detonated the fire extinguishers on the car but was able to get it back underway. They are 11th in P2 and 19th overall.

Jason Bright hasn’t been without his issues in the 8 Star Motorsports Ferrari. Getting some solid dry running for the first time this week, Bright suffered a puncture in the fifth hour, forcing him into an unscheduled pitstop.

Prior to the race, the Bright team had the bosses of the United Sportscar Racing Series – Don Panoz and Jim France (who waved the French flag to start the race) visit. 8 Star is running signage on its car to herald the merged ALMS and Grand-AM Series that is due to start in America next year.

Whilst many are hailing the potential of an Audi victory and a ninth for Tom Kristensen, there are still a full 12 hours of racing to go, with another four hours before the sun is due to rise again.