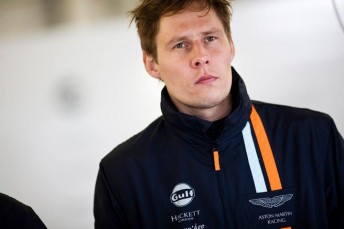 Versatile Danish driver Allan Simonsen has died from injuries sustained in an accident during the opening laps of the Le Mans 24 Hours.

The 34-year-old lost control of his Aston Martin Racing Vantage at the exit of the Tertre Rouge corner on just the third lap, making heavy contact with the barriers on the left-hand side of the circuit.

The Safety Car was required for more than an hour as officials attended to Simonsen and repaired the barriers.

A statement from race organisers the Automobile Club de l’Ouest subsequently confirmed that Simonsen died from his injuries after being transferred to the circuit’s medical centre.

Simonsen started the race from the GTE Am pole position and had been co-leading the 2013 World Endurance Championship pointscore for the class with co-drivers Christoffer Nygaard and Kristian Poulsen.

The popular Dane is the first driver to be killed in the Le Mans 24 Hours since Jo Gartner in 1986.

Aston Martin Racing says that, at the specific request of Simonsen’s family, it will continue in the race with its remaining four cars in tribute.

Simonsen had carved out a diverse globetrotting career over the last decade, with GT racing quickly turning into a specialty. 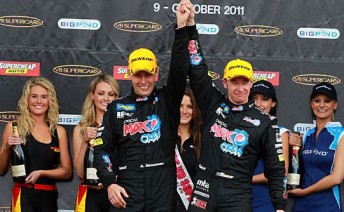 Simonsen finished third alongside Greg Murphy in the 2011 Bathurst 1000

His success in GTs included winning the GT2 class of the 2009 Asian Le Mans Series and scoring outright honours in the 2007 Australian GT Championship.

He was to have driven with David Wall in Brad Jones Racing’s #21 Holden at Sandown, Bathurst and the Gold Coast later this year.

A third place finish in the 2011 Bathurst 1000 alongside Greg Murphy, who had qualified the car on pole position, proved the high point of Simonsen’s V8 Supercars career.

Simonsen’s time in Australia also included a V8 Ute Series campaign in 2005 and a host of Nations Cup and GT Championship appearances, most recently driving with Maranello Motorsport in February’s Bathurst 12 Hour.

The time of 2:04.96s was set during the Sprint Bathurst hot lap event in November, 2011, and stood until it was bested by a Formula 3 car in April the following year.

Tributes to Simonsen began flooding in from all corners of the motor racing industry immediately after his passing was confirmed.

The ACO says it will make no further statement on the death until the exact reasons for the accident are determined.

Simonsen is survived by his partner Carina and daughter Mie-Mai.

Speedcafe.com passes on its condolences to the Simonsen family and friends, including the many he had in Australia.