Ogier leads the way in Sardinia

Ogier leads the way in Sardinia 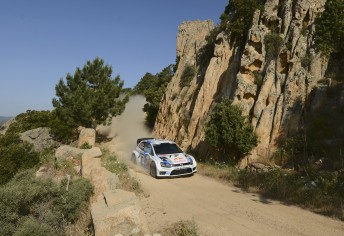 Sebastien Ogier holds a solid lead after the opening day of Rally Italia Sardegna – Round 7 of the FIA World Rally Championship.

Ogier is 46s up on Citroen’s Mikko Hirvonen who produced a clean run on the opening day to hold second place overnight.

“That was a very good first day for us, but we’re still only half way through Rally Italy,” said Ogier.

“The Polo R WRC is running like a dream, and we didn’t have a single problem with it today.”

Ostberg rolled on the final stage of the day with Novikov crashing out early on in SS2, also due to a roll under the slippery conditions.

Unfortunately for Novikov, the damage proved too severe and he will not restart for tomorrow’s final day.

Jari-Matti Latvala was dealt a cruel blow with a puncture on Friday’s opening stage but powered his Polo R WRC back into contention with two stage wins to sit fifth overall.

Former F1 star Robert Kubica leads the way in the WRC2 category despite losing nearly a minute of time when he was blinded by dust, catching the competitor in front due to one minute running gaps in the class.