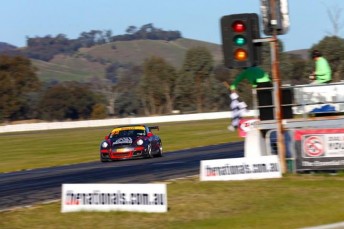 Richard Muscat has continued his outstanding rookie season form in the Porsche GT3 Cup Challenge by securing victory in the second Jim Richards Endurance Trophy race of the year at Winton.

The 20-year-old Melbourne based driver started from pole position but found himself trailing South Australian rival Michael Almond for the opening five of 30 laps.

Muscat then made a clean move for the lead at Turn 11 and was pulling away from Almond when the latter spun into the gravel at mid-distance.

Almond lost a lap while his car was being retrieved under the Safety Car and would eventually finish ninth in the thin 11 car field.

Philip Woodbury had earlier failed to take the start after his car suffered a mechanical failure on the warm-up lap.

Two sprint races will conclude the third round of the 2013 GT3 Cup Challenge on Sunday.

The Kumho V8 Touring Cars, Saloon Cars and Suzuki Swifts are also in action as part of the Shannons Nationals meeting at Winton this weekend.

The opening Kumho V8 Touring Car race of the weekend saw Shae Davies benefit from a mistake by early leader Tony Evangelou to take the win and extend his series lead.

In the Saloon Cars, defending series winner Simon Tabinor got the better of Luke Westall after a late-race restart to win the first of two 30 lap encounters for the weekend.

South Australian Wayne King had taken pole in the Top 10 Shootout and led the early laps until a Safety Car foiled his charge.

The full course yellows had appeared while King was one of the few left to make his compulsory 30 second pitstop – leaving the Holden driver down in 15th once the cycle had shaken out.

A second Safety Car later in the race assisted his fine recovery to an eventual second place finish.

Westall eventually came home 11th after being forced into a late second trip to pitlane.

In the Swift Series, it was category scholarship winner Callan Sayers who took pole ahead of Sunday’s opening race.