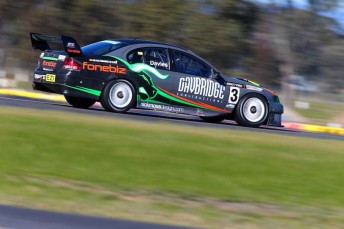 Shae Davies took his third win of the season

Shae Davies has extended his lead in the Kumho V8 Touring Car Series by taking out the opening race of the weekend at Winton Motor Raceway.

A slipping clutch saw Simpson drop back off the start before an incident with Morgan Haber at Turn 3 saw the former’s ex-Triple Eight Ford off the road.

Evangelou took the lead from Davies on the opening tour before falling off the road six laps later, allowing Davies through to take his third win from seven starts.

Davies’ series lead over Wyhoon has grown from one point to 26 after the latter finished just eighth.

Wyhoon, the defending series winner, had started 11th after his Ford suffered from ignition problems in qualifying.

Evangelou eventually finished second, just 0.8s behind Davies, with Haber – who was cleared of any wrongdoing in a post-race investigation of the Simpson incident – third.

Nathan Assaillit made it an all-Ford top four ahead of Holden drivers Sam Walter, Jim Pollicina and Matthew Hansen.

Josh Kean and Steve Briffa rounded out the top 10 in their Holdens, with Simpson recovering to 11th.