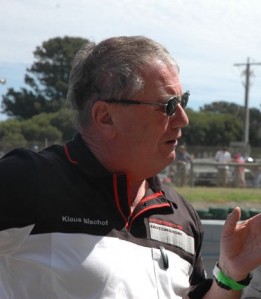 Klaus Bischof breaks out in goosebumps around this time of year over memories of the world’s greatest 24 Hour car race.

Bischof was a mechanic on the #22 Martini Racing Team-run 917K Porsche driven by Helmet Marko and Gijs van Lennep which won the Le Mans 24 Hour race in 1971.

It was Porsche’s second victory at Le Mans a year after Hans Hermann and Richard Attwood won in a Porsche 917K.

These days Bischof is the head of Porsche’s priceless rolling museum and is understandably excited about the car maker’s re-entry into LMP1 at La Sarthe next year.

Bischof is in charge of taking a 917, 936, 956, 962 and the GT1 to Le Mans as part of an evocative display that will revive memories of Porsche’s past glory at the majestic French motor race.

“It will be the short tail 917 but I also want to bring back the long tail from 1971,” Bischof told Speedcafe.com

“When I was the mechanic on the #22 winning car in 1971 the Pink Pig had an accident in the night and no-one saw this car running any more after 1971.”

The so-called Pink Pig had a distinctive paint job depicting a butcher’s diagram of different cuts of meat. 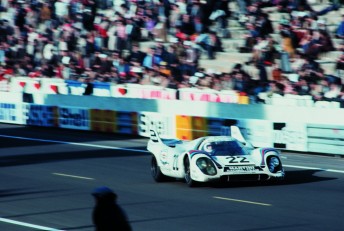 The Martini Racing Porsche 917K which won Le Mans in 1971

Bischof enjoyed his time during one of the great eras of Porsche through the 917 era, the model that was depicted in Steve McQueen’s movie Le Mans. Although his fondest memories are from the following decade.

“I am now 45 years working there (Porsche) and there are many decades to remember,” Bischof told Speedcafe.com

“It was all in our little department with one team doing Group C, F1, and the Dakar rally.

Bischof was part of the team when Stefan Bellof won the World Endurance Championship in 1984. (Bellof tragically lost his life at Eau Rouge at the Spa circuit the following year).

“We came to Sandown and it was my first time in Australia and one of my best times with Stefan (Bellof) and Derek Bell in their Rothmans 956.” From 1993 Bischof assumed responsibility for all of Porsche’s historic motorsport and it led him to Australia again with the advent of Targa Tasmania.

“I met John Bowe in 1994 who was telling me about Targa. Two years later I helped with one of our museum cars, a 356, which Jochen Mass and Geoff Hutchison took to victory in the historic class at Targa in 1996.”

Bischof oversaw the running of Porsche’s grand prix car from 1962 at the Goodwood Revival Festival in England last year, the same car which took American Dan Gurney to victory in the French Grand Prix at Rouen.

“Gurney had an operation and could not drive the car at Goodwood. So we organised for Sir Jackie Stewart to drive it. He had never driven a Porsche before and I told him that the gearbox is very tricky and we have only revs between 6000 and 8000rpm,” Biscoff recounted.

“After his first run he liked it so much that he did not want to stop driving it for the whole weekend.”

With Porsche’s popular decision to orchestrate a full-blown assault on LMP1 from 2014 at Le Mans to attempt to break Audi’s golden era, Bischof sees it as vital for the lineage of the German brand’s sports car heritage that sits in the museum.

“It’s not easy to sell historic racing if you are not actually participating in motorsport,” Bischof said.

“So the decision to go back to Le Mans (2014) is helpful for the historics. I don’t call them museum cars, they are historic motor racing cars.”