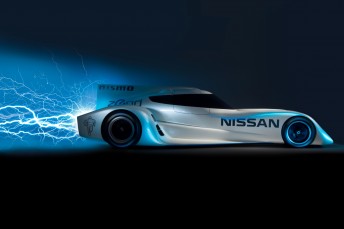 Nissan through its Nismo arm will take the Garage 56 experimental entry for the 2014 Le Mans 24 Hour with the ZEOD RC, which will be the world’s fastest electric racing car.

The project has input from Japan, Europe and the US, with racecar innovator Ben Bowlby appointed as Director of Motorsport Innovation for Nissan. Bowlby was the design brain behind the Don Panoz-inspired Deltawing that made its debut at Le Mans under Garage 56 last year.

Therefore, it is little surprise that many of the design cues of the ZEOD RC come directly from those of the Deltawing.

The car was unveiled by racefans at Le Mans, a unique and inclusive way to involve one of the most important stakeholders in motorsport. Nismo, through a partnership with video hosting site YouTube intends to use its Nismo.TV channel to engage fans and roll out more information into the leadup to the ZEOD RC’s racing debut in 12 months time. 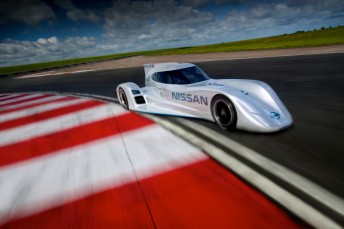 How the Nissan ZEOD RC will look on-track

The battery that will be used in the ZEOD RC comes from the Lithium battery technology that is the cornerstone of the Nissan LEAF electric road car program.

“Nissan is already a global leader in the sale of all-electric cars and we’re eagerly awaiting the opportunity to showcase the lessons learnt with the development of battery technology in the world’s oldest, toughest and most high profile endurance race,” added Palmer.

During the announcement, Palmer hinted that the Japanese company could join Audi, Toyota and from next year Porsche in challenging for the outright victory at Le Mans.

“The ZEOD RC program is designed to develop multiple technologies to evaluate how they could be used for a future LM P1 class return of Nissan at the Le Mans 24 Hour. There are multiple options we are investigating. A Zero Emission on Demand option where the driver can switch between electric and petrol-powered drive is a future direction for road cars, so that will be tested in addition to pure electric power and other new technologies that we still have under development.”

Nissan has joined forces with French tyre manufacturer, Michelin to develop suitable tyre technology for the ZEOD RC. Michelin was the foundation tyre technical partner for the Deltawing project and is supplying the bulk of the 2013 Le Mans field.

Earlier today, Nissan set the top three fastest times in LMP2 for this year’s Le Mans 24 Hour with the company supplying 15 of the 22 P2 engines, including that in the car being run by Australian, John Martin.