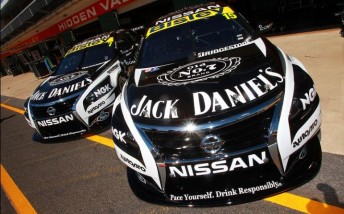 The Altima L33s of Todd and Rick Kelly

Nissan Motorsport is facing a race against time in order to usher in vital engine upgrades in time for the endurance races.

The four Altimas have struggled for straightline performance since making their debut at the Clipsal 500 in March, and team co-owner/driver Todd Kelly says that getting major upgrades on the cars in time for September’s Sandown 500 will prove a significant challenge.

“In dribs and drabs we may introduce some stuff by Queensland Raceway (July) and Winton (August) but all the big stuff is going to be touch and go for Sandown,” Kelly told Speedcafe.com.

Kelly outlined reasons why the major revisions to the engine, which is based off the one used in the Nissan Patrol road car, are taking so long to introduce.

“We are still not too far off what we started the season with in terms of cylinder heads and manifolds,” he said.

“All of the big stuff, the lead times on those things are so long that to design, manufacture and test something then approve and implement it is massive.

“Especially if it involves things like a piston or a valve or a cam then you are talking four to six weeks before we can get those parts from a supplier.

“Things that you can make in-house you can implement a bit quicker.”

The schedule on upgrades at the Braeside workshop is loaded to the gunnels in order to beat the clock and implement the upgrades so the Nissans can launch a competitive attack at Sandown, Bathurst and the Gold Coast.

Kelly admitted the squad would at a huge disadvantage without the major upgrades.

“We’ve got that much on the drawing board and in the machine shop in production at the moment for the engine; we’re just trying to get it done as quick as we can,” he said.

“But the bigger things we are hinging everything on is still in the process.

“We are hoping we can get somewhere before the enduros otherwise we are in big, big trouble if we are not.”

Kelly admits that the amount of money spent on development and testing has been huge but the team is still a long way from exhausting its ideas.

Rick Kelly has led the Nissan charge in recent events, clocking up a best race result of fifth on Saturday at Hidden Valley.