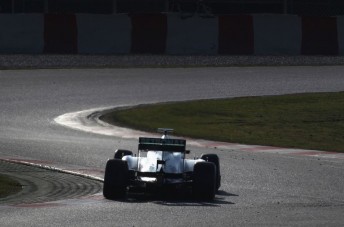 The controversy surrounds a tyre test that took place at Barcelona

The FIA Tribunal’s verdict over the alleged illegal testing by the Mercedes F1 team is scheduled to be delivered later today.

The tribunal met in Paris, France, on Thursday to thrash out the FIA’s case against Mercedes, which centres around a tyre test that took place at Barcelona in the days following the Spanish Grand Prix.

The FIA claims that Mercedes breached the sporting regulations by completing the three day test with a 2013-specification car.

Pirelli had also been called to the hearing to explain why it did not invite other teams to the test.

Mercedes claimed on Thursday that it had not broken any rules on the account of the fact that the test was organised and run by Pirelli.

Team principal Ross Brawn underlined his previous stance that the team had gained no advantage from the test, while team lawyer Paul Harris questioned why a similar Pirelli test undertaken with Ferrari, albeit undertaken using a 2011 car, earlier in the year had not landed the Italian team in hot water.

A claim from Mercedes that Formula 1 race director Charlie Whiting had approved its test was also made – a claim rebutted by the FIA’s lawyer Mark Howard who argued that only the FIA’s World Motor Sport Council can approve transgressions of the sporting regulations.

Pirelli, meanwhile, claimed that it could not be sanctioned by the FIA on the grounds that it is not a competitor or FIA member, merely a supplier.

Harris suggested at the close of Thursday’s proceedings that the tribunal could consider barring Mercedes from July’s three-day young driver test as punishment for the Barcelona running.

Mercedes also expressed regret that Nico Rosberg and Lewis Hamilton both used plain black helmets for the test – a move it admits could have interpreted as a suspicious act.

It claims that the regular helmets were not run due to a lack of personal security present for the star drivers.