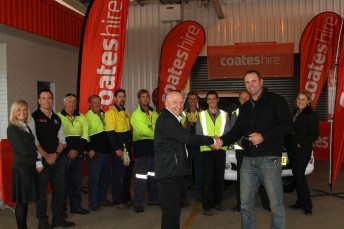 Pim Kay (R) receives the keys to his new HiLux from CEO of Coates Hire, Leigh Ainsworth as the Coates Hire Ballina Staff watch on

A Lennox Head, New South Wales, builder has won a Toyota HiLux SR5 thanks to Coates Hire’s Chariots of Hire competition that was featured nationally on Speedcafe.com, as well as in-store at each of Coates Hire’s 240 branches and through V8 Supercars telecasts.

On each visit Pim entered the Chariots of Hire promotion, hoping to win the major prize.

“I don’t win many prizes so this is fantastic and very much unexpected,” said Pim upon receiving the keys. 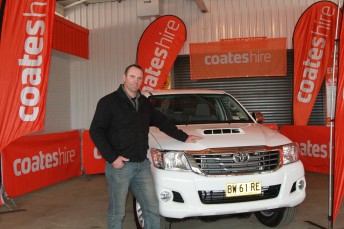 “I think there might be a few discussions between my wife and I as to who will drive it.

“I reckon the HiLux might be sharing its time between being the workhorse and the family car.”

Presenting Pim with the HiLux, Coates Hire Chief Executive Officer, Leigh Ainsworth added: “We are delighted to present Pim with this fantastic prize and trust he enjoys every moment behind the wheel.

“We hope the HiLux will be as valuable a business partner to him as Coates Hire has always been.”

Over 17,000 entries were received for the Chariots of Hire competition across the 240 outlets throughout Australia.