Mister Le Mans, Tom Kristensen will aim for his ninth victory at La Sarthe from pole position after nobody was able to better the time of Loic Duval in the number 2 Audi from yesterday in a frustrating pair of qualifying sessions for the 90th Le Mans 24 Hour race.

The troika of Audis will occupy the first three places on the grid, however Toyota recovered from yesterday’s gearbox problems to elevate it’s two machines to fourth and fifth. The number 3 Audi will line up second despite a very fast spin late in the final session on the approach to the Dunlop Bridge and the number 1 machine from third.

The predicted rain blanketed Le Mans ahead of the day time qualifying session. The track began to dry mid-way through the first session seeing teams cross to intermediate rubber. 40 minutes was stripped from the teams once again when another barrier was damaged in a crash.

Officials added half an hour to the night time session in an attempt to make up for much of the time that had been taken out with the red flags. In all, six red flags halted the practice and qualifying runs.

Damp conditions dried during the evening session to allow teams to lower their fuel level and attach soft tyres to try and nobble the Audi dominance. Despite some quick opening sectors, nobody was able to get around Loic Duval’s time set yesterday in the number 2 machine he will share with Kristensen and Allan McNish. Rebellion Racing pulled a strong effort with their Lolas which will line up behind the Toyotas.

The big moves came in LMP2, when in the final 30 minute burst, Australia’s John Martin had his pole position stolen by over a second. The OAK machine of Olivier Pla pinched the pole from the Queenslander as the chequered flag flew. Martin looked ecstatic with his performance regardless. 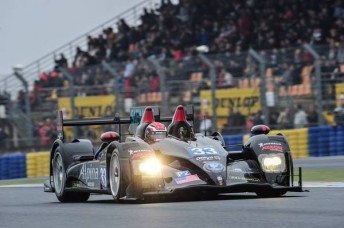 Martin’s Delta-ADR crew overnight converted their car to full race specification to allow its crew rest ahead of the 24 Hour race on Saturday.

Ryan Briscoe will start from 17th in P2 (26th overall) after a day that saw Marino Franchitti looping the Tucker Racing machine he will share with Briscoe and team owner, Scott Tucker with around 18 minutes remaining in the final session.

The big improver among the antipodeans was Brendon Hartley in the Murphy Oreca. He charged that to 15th overall, seventh in P2 late in the night session.

Jason Bright continued to have a frustrating run at Le Mans, completing just six laps in total at night time, not one of which was in dry conditions.

His 8 Star Motorsports Ferrari took a spin with nine minutes to go after a drama with one of the LMP2 machines. Bright wasn’t at the wheel at the time. They will start eighth in the GTE-AM category having advanced a place to 49th on the grid after yesterday.

Aston Martin dominated both of the GTE categories, with Bruno Senna being the quickest in GTE-Pro. Australian regular, Allan Simonsen placed his Aston at the head of GTE-Am.

The Porsche owned by Sydney FC’s Alessandro Del Piero and Patrick Dempsey will start from sixth in GTE-Am.

The Tracy Krohn Ferrari that crashed yesterday got out late in the final session. Another car was delivered from Michelotto overnight after Krohn halted practice with his crash on Wednesday. The team worked feverishly to up-spec it to GTE-Am specifications before taking to the track.

That brings to an end the qualifications with only the morning warmup and then the 24 Hour race to come on Saturday, which will begin at 11pm Australian time.