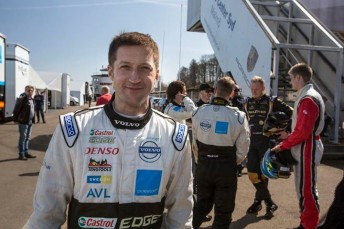 The role of Swedish performance firm Polestar in the deal between Volvo Car Australia and Garry Rogers Motorsport has led to suggestions that a Swedish driver could be considered for the program.

Dahlgren has been at the centre of the talk having attended the Brisbane launch on Monday, where he was involved in the promotion of the new Volvo S60 Polestar road car that he helped develop.

Dahlgren has been a Polestar driver since the brand started in 2004 and currently competes in the outfit’s five-car Scandinavian Touring Car Championship operation.

At Monday’s announcement, team owner Garry Rogers stated a preference to keep his current drivers Alexandre Premat and Scott McLaughlin for next season, but left the door open for change.

Premat remains a largely unproven force in V8 Supercars, while McLaughlin is understood to be highly rated by Holden following a stellar start to his rookie campaign and is likely to be a man in demand for 2014.

The coming V8 Supercars ‘silly season’ threatens to be one of the most turbulent in years with several high profile drivers out of contract, including the likes of James Courtney and Will Davison.

“It’s not up to me, I have a great championship in Sweden to focus on,” the 33-year-old Dahlgren told Speedcafe.com when asked if he’d like to join Volvo’s V8 Supercar effort.

“It’s up to Volvo and Polestar and everyone here in Australia on what they do. I focus on what I’m doing and I’m happy with that.”

Dahlgren did however speak highly of the Australian touring car class.

“I’m excited for Volvo and for Polestar that they have taken this step and also for Volvo Australia,” he said.

“It’s an amazing and exciting championship. All the drivers in Europe know about this V8 Championship and it’s been growing all the time.”

Like Dahlgren and Volvo, Engel had been a quiet observer at Erebus’ own launch in September, 2012; five months before signing with the team.

Dahlgren is no stranger to Australia having raced karts here in the mid 1990s, running in the Castrol International Kart Prix at Oran Park and the CIK-FIA Oceania Championship at the Raleigh circuit in Coffs Harbour.

Additionally, he was team-mates with Australians Will Power and James Courtney during his stints in British Formula 3 and Formula Ford respectively.