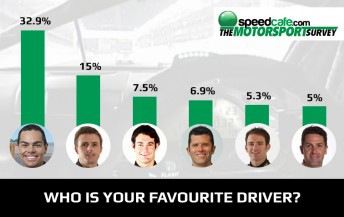 Data from the comprehensive survey that asked participants to answer or respond to 169 questions and statements saw more than 6000 complete the investigation which ran from March 13 to midnight May 29.

When asked to name their favourite driver Craig Lowndes was overwhelmingly the most popular at 32.9 per cent however the shock was the order behind the people’s favourite racer.

The next most popular was Ford factory driver Mark Winterbottom who captured 15.0 per cent of the vote while controversial Kiwi Shane van Gisbergen was third at 7.5 per cent.

Holden factory spearhead Garth Tander was next, attracting 6.9 per cent, while Winterbottom’s team-mate Will Davison finished at 5.3 per cent.

Sixth on the list was Jamie Whincup, winner of every Championship since 2008 except for 2010, who attracted 5 per cent. 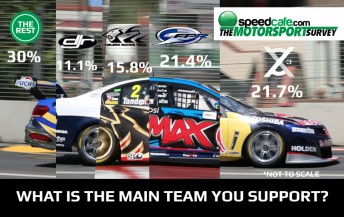 There were some revealing statistics in team land. In response to the question of what is the main team you support in V8 Supercars there was little separating Triple Eight and Ford Performance Racing.

Triple Eight topped the question at 21.7 per cent narrowly ahead of FPR at 21.4 with the Holden Racing Team a clear third at 15.8 per cent with Dick Johnson Racing the only other squad to make double figures on 11.1 per cent.

On the question of what manufacturer was the most supported, Holden came out on top at 34.5 per cent ahead of Ford 30.2 per cent.

The big two had enjoyed a duopoly for 20 years before V8 Supercars changed the rules to open-up the category for more manufacturers this year.

The next best supported manufacturer was the privateer Mercedes-Benz AMG effort at 9.3 per cent ahead of Nissan (4.8).

However there was a noticeable shift away from singular manufacturer favouritism with 21.2 per cent of respondents opting to support all participating car brands.

The street-art inspired Pepsi Max Crew designs topped the question of what is the best looking livery in V8 Supercars for the current season.

The FPR Falcons of Mark Winterbottom and Will Davison grabbed 19.5 per cent of the vote from Red Bull Racing Australia at 19.1 per cent.

There was strong support for the SP Tools liveried Merc of Maro Engel which attracted 11.0 per cent with the Holden Racing Team coming in next at 10.8.