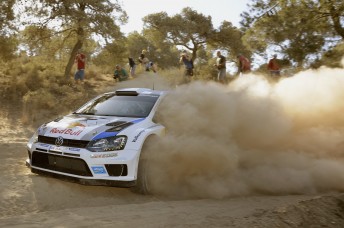 Volkswagen driver Jari-Matti Latvala has continued his strong pace from Rally Greece by winning the qualifying stage at Rally Italia Sardegna – Round 7 of the FIA World Rally Championship.

In fact, the entire field will see a ‘reverse grid’ effect with the fastest in today’s qualifying stage running last on the road and the slowest to run first on the loose gravel.

Second fastest on the qualifying stage was the ever impressive Russian Evgeny Novikov driving a Qatar M-Sport Fiesta RS WRC.

Leg 1 starting order (on the road):