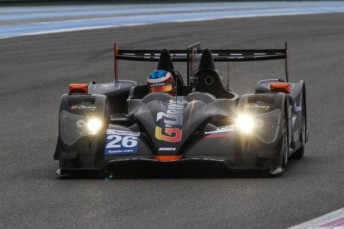 With inclement weather expected to hit La Sarthe tomorrow, much of the focus for the teams was to get each driver through their mandatory five lap night time qualifying stint, whilst also going for a banker lap.

Martin set the quick time in the ADR machine, also owned by an Australian in veteran car owner, Alan Docking.

The #2 Audi piloted by Le Mans legends Tom Kristensen, Allan McNish and Loic Duval set the provisional pole time ahead of the #3 car with the #1 machine third quickest.

Toyota’s tilt at challenging the Audi dominance struck trouble 50 minutes into the two hour session when the gearbox quit on Sebastien Buemi on the entrance to Indianapolis. The failure hampered Anthony Davidson’s return to Le Mans after his huge accident last year.

An unexpected fly in the ointment came with 54 minutes remaining in the session. A red flag brought a premature end to qualifying when Pierre Thiriet damaged the armco barrier at the chicane on the Mulsanne in the #46 TDS Racing Oreca-Nissan. With that part of the course being a public road, officials had to run to time and spent the remaining hour of the session welding the fence.

The second Toyota was returned to the paddock under red flag conditions, however much to the chagrin of the Toyota team, it was placed straight under parc ferme conditions and they were unable to access it to fix the drama which brought Buemi to a standstill.

Aussie LMP2 “rookie”, Ryan Briscoe’s HPD which he’s sharing with team owner, Scott Tucker and Marino Franchitti is 15th in class (23rd overall), however didn’t get a run on a fresh set of tyres.

Jason Bright’s Le Mans debut saw him qualify the 8 Star Motorsport Ferrari 458 Italia 11th in the GTE-AM category and 50th overall. In the GTE-Am category, Australian regular, Allan Simonsen sits on provisional pole in his Aston Martin, whilst in the GTE-Pro category, Aston Martin holds the pole with Bruno Senna, getting the centennial celebrations of the British marque under way in the best possible fashion.

Meantime, the Porsche owned by Sydney FC’s A-League marquee footballer, Alessandro Del Piero and actor Patrick Dempsey sits seventh in GTA (45th overall). Dempsey (aka McDreamy) shares with Joey Foster and Patrick Long – both of whom have raced at the Armor All Gold Coast 600 as International guest drivers.

Kiwi Brendon Hartley who is sharing with former F1 pilot, Karun Chandhok was 9th in LMP2 (17th overall) aboard his Murphy Nissan-powered Oreca.

With 17 laps by the lead LMP1 cars being the maximum amount of laps completed in the session, most teams have not been able to get their mandatory five laps per driver at night through, which will produce added pressure for tomorrow night’s final qualifying.

Earlier in the day, half an hour was lost in the practice session due to barrier damage when a Ferrari was destroyed in an accident.

Tomorrow’s program (early morning Australian time) includes a twilight two hour session from 7pm local time, which will be followed by another two hour night time session at 10pm. With teams losing almost an hour with tonight’s red flag and the potential of wet weather hitting the 13.6km circuit, tomorrow’s sessions will be critical.