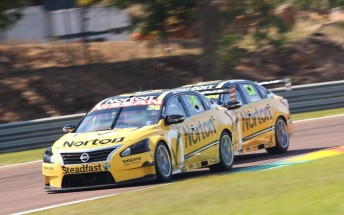 Michael Caruso and James Moffat battle it out at Hidden Valley

Nissan has flagged intentions to expand its involvement in V8 Supercars and other forms of touring car racing with its Altima model in future.

Nissan is barely six months into its campaign in V8 Supercars with the formerly Kelly Racing team but is forecasting that it will spread its tentacles further in Australasia.

The company is showcasing its Altima model through V8 Supercars ahead of the nameplate’s debut in the Australian market during the final quarter of 2013.

Any bold plans, however, are unlikely to be acted upon until the factory team is chalking up consistently strong results.

“Nissan will be looking at expanding our horizons into more teams on a customer basis,” Nissan’s motorsport manager Jeff Fisher told Speedcafe.com.

“Our ideal concept would be to have Altima manifesting itself across many forms of different motorsport.

“At the moment it remains a bit of a dream. We need to be able to walk before we can run.

“All of our attentions, money, effort, technical and human resources are going into being regular podium finishers

“Until we get there and we can manage that consistently moving beyond Nissan Motorsport as a factory team is not an option.”

Dunlop Series team owner Maurie Pickering (Finance Ezi) has already made an approach to Nissan about the feasibility of a customer Altima program, should he be able to secure a Racing Entitlements Contract in which to enter the main series.

“He has been delivered a message that we are not quite ready yet,” said Fisher of the approach.

New Zealand remains on the radar of any expansion plans for the Japanese company although the fractured touring car scene, currently split between rival V8 SuperTourers and NZV8s categories, is sending out confusing messages to any potential new player.

“I hear from the guys on the ground in New Zealand that they are struggling to interpret what a motorsport presence would look like for their market,” Fisher said.

“We would revisit any approach to NZ. I would want to have their (Nissan representatives) confidence that they can put it to work in NZ and put it together as a corporate property.

“Once they sign up for that mindset then we can look at what we want to do.

“Whether it be SuperTourers, NZV8s or whatever category it is at the time where the Altima would be the basis for that with the amount of work that Todd Kelly has done on the car.”

Globally Nissan is in the middle of a renaissance by re-inventing itself in different categories both in Japan and Europe, where it will launch its Garage 56 project for the 2014 Le Mans 24 Hours later this week.