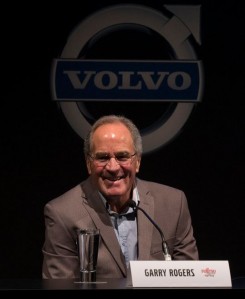 As one of the sport’s most colourful characters, it should be no surprise that it was Garry Rogers who pulled off what is perhaps the most left-field deals in V8 Supercars history.

Rogers’ long-serving squad will become the factory team for the newest entity in V8 Supercars – Volvo Polestar Racing – which will enter a pair of S60 sedans through GRM in 2014.

Rogers was beaming during Monday’s announcement in Brisbane, which coincided with the global press launch of the high performance road-going Polestar S60.

SPEEDCAFE: You have been involved in motor racing for 50 years. How big is this deal for you and your team?

GARRY ROGERS: Extremely. It’s been a long road, a lot of hard work and not just by myself. My people (GRM staff) have been great. While not negotiating with me everyday while we are doing things, the girls and the guys are the backbone and we wouldn’t have the business we’ve got.

It is a great moment and we’ve just got to enjoy it and get our head down and bum up and get on with it.

SPEEDCAFE: In terms of your career where does this stack up? I know this only a deal but it’s a big deal.

ROGERS: It’s a big deal but of course as you get a bit older things change. I would be more excited 50 years ago or 49 years and 364 days ago to have just got in the car and driven the bloody thing because that’s really what you wanted to do.

But now you have a business around you and people depend on you for their living. To be able to work toward and build a business to be able to do this, it is extremely rewarding. 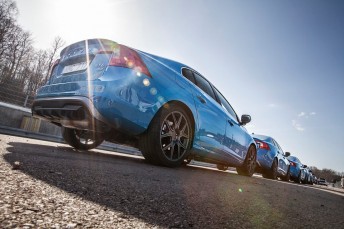 SPEEDCAFE: Your two drivers Alex Premat and Scott McLaughlin, are they locked in for next year?

ROGERS: They are. But look, all our contracts. My contract is conditional upon me doing the job. When I don’t do the job someone’s got to kick me out. And when I have people who don’t do the job, they’ve got to go. We’ve never been grey about that. That’s how we do business.

I have no doubt that everybody will be down there doing their best, drivers, mechanics, floor sweepers to get this opportunity working really, really well.

SPEEDCAFE: The Polestar brand is heavily involved. How do Fujitsu see the Volvo announcement?

ROGERS: Not only Fujitsu but Valvoline should not be forgotten in this equation either because they have been with me for 25 years. Fujitsu came along initially for two years and we’ve now concluded four years and they are really excited by this. They see it as a great opportunity.

Let’s face it, Volvo is a great brand. Fujitsu and Volvo will work well together. From a marketing point of view they are all very positive about being able to utilise this as the image of the team.

SPEEDCAFE: You ran a series of makes including Nissans, Alfas and Hondas in the Super Touring days in Australia and Commodores through the V8 Supercar era up until the end of this year. So after all this time this is the first factory deal you have been able to pull off… 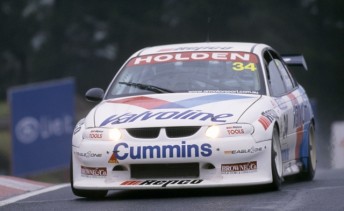 ROGERS: It is a massive deal. It’s a bit like the 50 years (Rogers’ involvement in motor racing) deal. I hadn’t thought anything about it until Mike Tubbs who does our merchandising said last year ‘we need to do something because you have been in business 50 years’.

When I first started talking to people I wanted to get the (Volvo) deal because I saw it as a way to keep going. We want to keep going forever. And unless we aligned ourselves with a manufacturer we would not be able to continue at ‘1000 per cent’. And it is as you say massive. Albeit that is has taken a long time it is certainly very, very rewarding.

SPEEDCAFE: Who made the first advances last year when the negotiations first started in September. Was it you or Volvo?

I had spoke to Matt Braid (Volvo Cars Australia managing director) then Christian Dahl (Polestar managing director) came and visited us early in the year. He met with my staff and we had further discussions and it sorted of ran along from there. That’s pretty much how it went.

I know it’s been a bit of a secret mission and I don’t like telling deliberate lies to anybody. There were some marketing issues and I can understand Volvo wanting to get their bang for their buck out of this so we just made sure we had everything in order before we ‘boom’ that’s it.