A scheduled test run in practice at Hidden Valley was abandoned

Significant revisions to V8 Supercars’ troublesome control Albins gearbox may not be fully tested for several months, leaving teams to persevere with the labour intensive task of servicing their transmissions prematurely.

A gearbox fitted with extensive modifications was scheduled to have been fitted to one of the 28 V8 Supercars as a test mule in time for Friday practice at Hidden Valley last weekend but did not proceed as planned.

Albins will now approach teams about their own track testing plans over the coming weeks in order to begin validation running with a beefed up unit.

Some of the expected changes include gear design, gear detail, shift ring and other internal modifications, with teams having experienced a variety of different issues under racing conditions.

General manager of the Ballarat-based Albins company, Steve Macdonald, said the revised gearbox is ready to be tested but it needs to register decent mileage in order to validate the internal changes.

“It (the upgrade package) is all ready to run and will just be rolled out when teams are ready to test over a period of time. 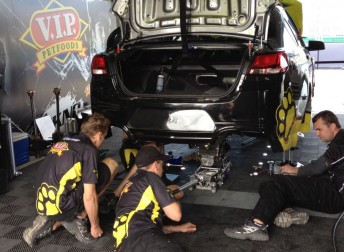 “Then we will pull it apart and have a look and if we see any indications of wear or see anything where we need to do further changes to it we will.”

The major issue that teams have faced in recent months is that the boxes are needing complete rebuilds well short of the hoped 5,000km life.

Macdonald stressed however that the gearbox problems are not resulting in teams experiencing non-finishes on the track.

“They are not failing in races,” he said.

“As far as genuine transmission failures and parts that have gone wrong that have stopped race cars, it’s incredibly limited.

“For us it’s a durability of parts issue and not a finishing on the track issue.

“For my money if I’m a team owner and I’ve got a gearbox there, I’d service the one I’ve got.

“There’s probably some incremental stuff we can do to improve some stuff and some of those may be run before Bathurst.

“We’ve got to cram 25 years worth of development into the past six months and when we do an upgrade we’ve got to do the whole category at once.”

The need to repeatedly rebuild gearboxes with small batches of spare parts are said to have hindered some teams’ private testing plans throughout the early part of the season.