Volvo’s global racing partner Polestar is confident of having the Swedish marque’s V8 engine up to speed in time for a competitive assault on the 2014 V8 Supercars Championship.

It was confirmed on Monday that Volvo Cars Australia has engaged the privately owned Swedish performance company Polestar to design and develop engines for a Volvo V8 Supercars program.

Garry Rogers Motorsport will race two S60s in the category from next season under the Volvo Polestar Racing banner.

Volvo has elected to resurrect its B8444S engine for the racing effort, joining new-for-2013 players Nissan and Mercedes-Benz AMG in campaigning aluminum, double-overhead-cam, powerplants against the venerable cast-iron, push-rod, Ford and Holden units.

The B8444S, which was originally designed and built by Yamaha on behalf of Volvo, will need to be expanded from its standard 4.4 litre capacity to meet the 5.0 litre V8 Supercar regulations.

The engine was discontinued from Volvo’s S80 sedan and XC90 SUV models in 2010, although a limited production of the blocks has continued, with the architecture currently used by boutique British sportscar manufacturer Noble.

Despite the engine’s 60 degree bank layout and transverse mounting in the Volvo road cars, Polestar founder and managing director Christian Dahl says that meeting V8 Supercars’ requirements will not be a major issue. With initial discussions between Volvo, Polestar and V8 Supercars having begun as early as September last year, engine design work is said to have started “months ago” in Polestar’s Gothenburg, Sweden, facility.

“We knew what direction the negotiations were going in and we have been working on the Volvo-based V8 for quite some time,” Dahl told Speedcafe.com.

“It just needs to be bored and stroked and, starting with a 4.4-litre, it’s not like AMG which had to bring the size down from 6.3 litres (for Erebus Motorsport’s 2013 V8 Supercar entry).

“The Polestar guys are using it (the B8444S) now to develop the race engine from that production engine and we will get to the stage of being able to run it on the dynamometer later in the year,” he continued.

“It is not a major engineering exercise to bring it up to V8 Supercars specifications. The challenge is to get the right horsepower out of it.”

The progress of the engine development will almost certainly determine when the first S60 V8 Supercar hits the track for testing, which is predicted to be in the final weeks of the 2013 calendar year. 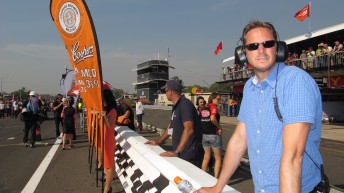 It is currently unclear how the engine program will work once the initial development phase has been completed, although it is thought highly likely that GRM will service the motors at its own workshop, as Erebus is now doing with its German-built AMG customer units.

Prior to attending yesterday’s Volvo V8 Supercars launch in Brisbane, Dahl visited the Hidden Valley paddock where he was welcomed into a number of team garages.

Despite being highly impressed with what he saw, Dahl is confident of making a strong fist of the 2014 season.

“I really think this championship is better than the World Touring Car Championship and what we have in Sweden,” he said.

“It’s a real balance of performance (a level playing field between the manufacturers) so if you do a good job you can win races here.

“I think Red Bull (Triple Eight) is in a league of its own at the moment, but I think we can also do a really good job when we enter next year and fight for the championship in the future.”

Polestar’s current racing efforts consist of a five-car assault on the Scandinavian Touring Car Championship, having moved across from the breakaway TTA Racing Elite League when the two series re-united for 2013.

The Polestar name dates back to 2005, when Dahl purchased Volvo’s then chosen performance arm Flash Engineering, which had been founded Jan ‘Flash’ Nilsson nine years earlier.