Bright arrives at Le Mans ahead of debut

Bright arrives at Le Mans ahead of debut 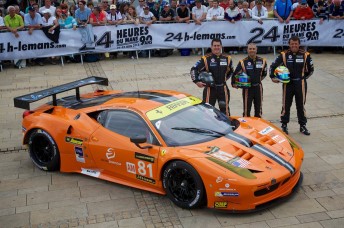 V8 Supercar star Jason Bright is soaking up the atmosphere in Le Mans, France, ahead of his debut in the famed 24 Hour endurance race this weekend.

The Brad Jones Racing regular made a dash to Darwin airport on Sunday night after the Hidden Valley event in order to arrive at Le Mans ahead of the unique scrutineering sessions held in the middle of town.

Bright has not seen his Melbourne home since early May, combining a holiday in the United States prior to the Austin, Texas, V8 Supercar event with subsequent holidays in the United Kingdom and Malta.

He then made an initial trip to Le Mans for the pre-event test held a week week prior to Hidden Valley.

“It was very tight after finishing the race in Darwin to get to the flight,” said Bright of his latest travels in a video diary posted to the team’s website.

“I managed to make that flight, had a small connection in Singapore and then I was straight into Paris.

“It was actually quite painless getting here compared to what I was concerned about.

“I didn’t have a great weekend racing in Darwin, so hopefully this weekend will be a lot more successful.”

Bright began putting his Le Mans deal together as soon as it became clear that neither the pre-event test nor the race itself clashed with a V8 Supercar meeting.

The former Bathurst 1000 winner had come close to competing in the 24 Hours with Aston Martin in 2006 before a late V8 Supercar scheduling change scuppered his plans.

“It’s something that I’ve wanted to do for a long time and actually being here and watching the cars go through scrutineering and seeing the media attention is very special,” he said.

“It’s great to actually be speaking to the media and seeing how much they all follow V8 Supercars.

“It actually does get a lot more attention over here than what you realise back home.”

The first official practice session will take place on Wednesday ahead of the Saturday afternoon race start.

The race will be broadcast live in Australia on subscription channel Speed TV, in addition to being streamed live on Ten Sport’s website.