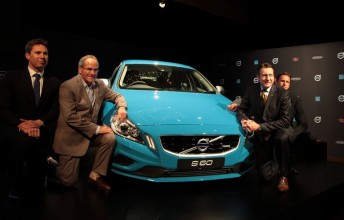 Volvo has officially launched its 2014 V8 Supercars entry at a media event in Brisbane.

The team will be known as Volvo Polestar Racing and campaign two S60-bodied entries in next year’s championship.

The cars will be powered by a bespoke 5.0 litre V8 Supercars version of Volvo’s 4.4 litre B8444S engine, which is already under development at Polestar’s headquarters in Sweden.

The squad hopes to have its first car on track for testing in the final quarter of 2013.

“I’m delighted to announce our return to motorsport in Australia,” said Braid.

“Volvo has a rich motorsport heritage in this country, including winning Australia’s most famous race, Bathurst, 15 years ago this coming October.

“As the first luxury car brand to enter a factory team in the V8 Supercars Championship, we’re determined to add to this heritage, while strengthening the presence of the S60 model line and the Volvo brand here in Australia.”

Added Dahl: “We are very proud and excited to take on the V8 Supercars together with Volvo Car Australia and Garry Rogers Motorsport, a championship that has grown to become one of the most prestigious and competitive racing championships in the world.

“Polestar will do our absolute best to add Volvo knowledge, engineering and development strengths to the already competent team at Garry Rogers Motorsport.”

The deal marks a return to Australian touring car racing for Volvo, having won the 1986 title with its 240T Group A and driver Robbie Francevic during a short-lived dealer team effort.

For Rogers, the agreement is the end of a long search for new factory backing for his team following Holden’s rollback in investment.

“For myself and all our staff and sponsors who have been with us for a considerable time, the opportunity to utilise the Car of the Future regulations to introduce Volvo to our category is certainly very exciting,” said Rogers, who also confirmed that current naming rights backer Fujitsu will continue as a sponsor of the team under the new deal.

“I know that if we continue to work hard it will also become very rewarding.

“The opportunity to align ourselves with Volvo, one of the world’s most recognised brands, and team up with Christian Dahl and Polestar, is first class.

“I am still a racer at heart and the big plus of this relationship that impressed me more than others manufacturers I had spoken to was the fact these people had done their homework on the Car of the Future rules and regulations, and could see the commercial opportunities that this offered.

“Most heartening of all, I am dealing with people who understand racing from an engineering perspective and the personal, day-to-day matters you need to have experienced to achieve success.”

The former, who has an extensive background in sales through previous work in the automotive and television industries, hailed it a “red letter day” for the championship.

“It is my vision to build V8 Supercars into one of the strongest brands in the world with the partners to match,” he said.

“That is the level of untapped potential I believe this sport has.”

Volvo is the third manufacturer to commit to the 2014 V8 Supercars season, with Holden and Nissan currently locked into multi-year deals with its flagship squads.

Ford is yet to confirm its plans, although is expected to continue in some form, while Erebus Motorsport’s Mercedes-Benz  effort is a customer team of AMG and not a factory program.