PIRTEK POLL: Which marque will you support in 2014?

PIRTEK POLL: Which marque will you support in 2014? 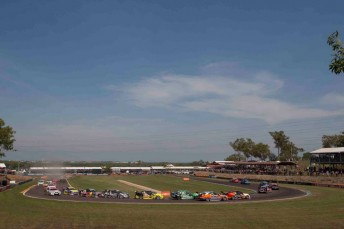 At least five car manufacturers are expected to be represented on the 2014 V8 Supercars grid following today’s confirmation that Volvo will enter the championship.

Long-time players Holden and Ford were joined by factory Nissan and privateer Mercedes-Benz efforts under the Car of the Future regulations this season, ending almost 20 years of two-marque racing.

The new marques have faced a tough task to bring home results in the early part of the campaign, while their respective efforts to build fan bases against the established players has been somewhat harder to chart.

Not surprisingly, Nissan has made a significant splash since announcing its V8 Supercars intentions in February, 2012, with the media coverage gained now being used by V8 Supercars as the blueprint to lure in more players.

Despite triggering a starkly mixed reaction from online fans with its initial announcement, the formerly Kelly Racing team is understood to be enjoying a healthy increase in merchandise sales over last season.

The Erebus-Mercedes outfit meanwhile appears to be building somewhat of a cult following of its own thanks to its colourful owner Betty Klimenko.

Volvo will face the same challenges when it fires up its Polestar-developed S60s for 2014, which will signal the brand’s first involvement in Australia’s premier touring car class since its victorious 1986 assault.

The Volvo deal comes at a time when Ford is yet to commit to its 2014 plans.

In this week’s Pirtek Poll, we ask the simple question: Which marque will you support in 2014?