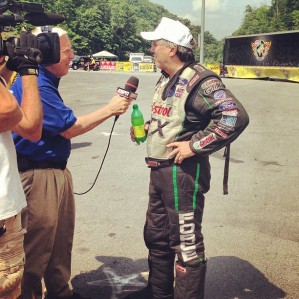 John Force has taken victory for the first time in 31 events in his Castrol GTX Mustang at the Thunder Valley Nationals in Bristol, beating out fellow veteran Cruz Pedregon in the NHRA Mello Yello Series Funny Car final.

To take his 135th career victory and fourth at Bristol, Force defeated daughter Courtney Force, points leader Matt Hagan and  Blake Alexander to advance to the final round.

“I really thought Courtney was going to take me out first round,” Force said. “Her car has been flyin’ all year. It’s all in the teamwork. We haven’t won the championship, we haven’t won the Countdown, but we have a race car. That’s what I’m excited about. It’s a great day.”

In America being Father’s Day, it was a special day for drag racing’s number one family.

Steve Torrence took his first win of the year in the Capco machine and his first with tuner, Lee Beard, who walked away from Australian team, Rapisarda Autosport International last month.

To get to the final, he defeated lady racer Leah Pruett, last round winner Shawn Langdon and Morgan Lucas. Tony Schumacher re-assumed the tight points lead by a single point over Langdon.

Aussie Dave Grubnic was taken out in the first round by Lucas.

He made his way to the final by  getting past V. Gaines,  top qualifier Mike Edwards and Jason Line before driving around Enders-Stevens in the final.

Mike Edwards maintained his points lead, whilst Brogdon moved to ninth on the table and inside the Countdown zone.

The next event will be next weekend with the New England Nationals in New Hampshire.