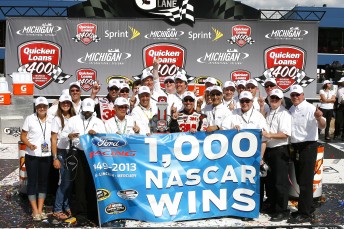 Biffle joins in the Ford celebration at Michigan

Biffle’s first win of the season and second career victory at Michigan, was aided by a late tyre issue for Jimmie Johnson who hit the wall with two laps to run.

Biffle finished more than four seconds ahead of Kevin Harvick.

“I love it when the 48 crashes trying to catch me. Love it,” said Biffle on the team radio after crossing the finish line.

“I don’t want to see anybody wreck; I should have said make a mistake,” said Biffle.

“And that’s truly what he did is he made a mistake. He pushed the envelope, and we all do that. I almost did that; he almost busted me, and basically that’s what I was referring to was breaking him.”

Johnson’s points lead is now 31 over Carl Edwards and Biffle is eighth in the standings.

After a challenging race Marcos Ambrose finished 23rd and will be looking forward to the first of two road course races next week at Sonoma outside San Francisco.