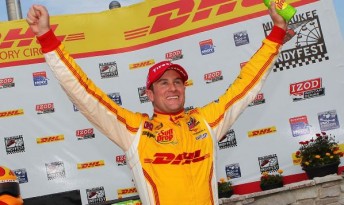 Ryan Hunter-Reay’s quest for a second consecutive IndyCar Series title has received a well-timed boost with victory at Milwaukee.

Returning to the Wisconsin venue that kick-started his 2012 title assault, Hunter-Reay controlled much of the 250 lap race.

The Andretti driver eventually led home Helio Castronves and now sits second in the standings to the Brazilian.

A solid run from Will Power netted third ahead of EJ Viso and James Hinchcliffe as Andretti and Penske again locked out the top five places, just as they had done so in qualifying.

It was a disastrous day for pole-sitter Marco Andretti, however, who lost 75 laps in the pits with an electrical problem.

Sato had joined Castroneves and several others in going off-sequence on strategy mid-race – a move that saw him hold the lead on three separate occasions.

The timing of the penultimate pitstops would prove crucial, with Sato losing significant ground by stopping under green moments before a full-course yellow.

Australia’s Ryan Briscoe two laps down in 15th after a race that saw just eight cars finish on the lead lap.