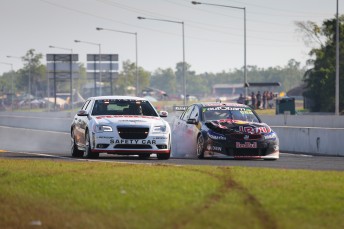 Craig Lowndes has been handed a 15-point penalty for his part in the hairpin melee in Race 17.

Davison subsequently spun with his car and Tander’s suffering major damage in the incident.

Tander soldiered on to finish 13th while Lowndes was classified in 26th however Davison was forced to retire 13 laps short of the full distance in the 42-lap race that was split in two in the 60/60 sprint format.

Lowndes maintains second in the Championship behind his Red Bull team-mate Jamie Whincup however Davison has lost third place to Jason Bright.