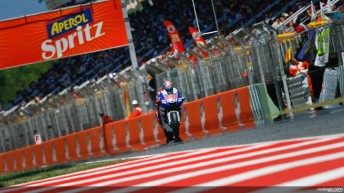 Jorge Lorenzo is just seven points behind championship leader Dani Pedrosa after taking victory in the Grand Prix of Catalunya.

The Yamaha rider produced yet another impressive ride to ensure he secured his second consecutive win and close the gap even more to title race leader Pedrosa.

The Barcelona crowd had plenty to celebrate with Honda duo Pedrosa and Marc Marquez completing a Spanish lockout on the podium.

Lorenzo managed to get the jump at the start and he and Pedrosa almost collided on the run down to the first corner. The Yamaha man won the battle forcing Pedrosa to slot into second with Marquez making an excellent start to move into third.

Valentino Rossi was another rider who made progress moving from seventh to fifth just behind Monster Yamaha’s Cal Crutchlow.

The front five began to pull away from the chasing pack but the early stages were littered with a number of falls. Randy De Puniet and Michael Laverty were the first to fall as the surprisingly hot conditions made the track surface a little greasy.

Alvaro Bautista was the next to fall at turn 10 almost taking out Rossi for the second race in succession.

Moments later Crutchlow and Ducati’s Nicky Hayden were forced into retirement as they lost control of their machines.

Meanwhile at the front Marquez began to pile the pressure on second placed Pedrosa which allowed Lorenzo to open up a gap. Hopes of a podium for Rossi soon faded as he was unable to maintain the pace ahead in fourth and dropped back from the lead trio.

Pedrosa regrouped at the halfway point and soon found himself all over the back of Lorenzo but he couldn’t force a mistake from the Yamaha man.

Marquez was not finished either and his pursuit of Pedrosa meant the championship leader was unable to relax and had to ride defensively. The change of riding style allowed Lorenzo to build a healthy lead which he maintained to the chequered flag.

Marquez tried everything to pass Pedrosa in the closing stages but he had to settle for third behind his team-mate. Rossi came home in fourth ahead Stefan Bradl, Bradley Smith and Andrea Dovizioso. Two-time World Superbike champion Colin Edwards was the top CRT rider in ninth.

The Grand Prix of Catalunya will live long in the memory of Western Australian Bryan Staring as he secured his first points by guiding his Gresini CRT machine home in 14th position.

The MotoGP Championship moves to the famous Assen circuit in The Netherlands for round seven on June 29.