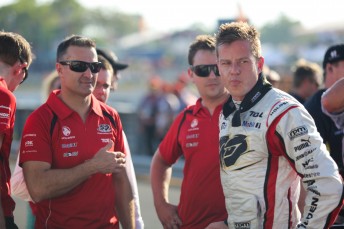 Holden Racing Team driver James Courtney has landed pole position for Race 18 at the SKYCITY Triple Crown round in Darwin.

Courtney landed the prime spot after setting a blindly quick 1:08.5384s and will gave Mark Winterbottom beside him on the front row for the 35-lap race.

Winterbottom dived into second in the dying seconds ahead of FPR team-mate Will Davison as the Ford factory team try to recover from a disastrous Race 17.

Fabian Coulthard was fourth ahead of Jamie Whincup.

Garry Rogers Motorsport driver Scott McLaughlin was the first driver into to dip below 1:09s with his 1:08.955s remaining the time to beat with under two minutes remaining. However McLaughlin was shuffled back to 14th after the late flurry of hot laps.