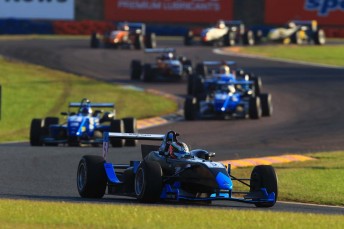 Nick Foster has claimed victory in the City of Darwin Cup after dominating at Hidden Valley.

Foster won by six seconds, led every lap and jumped from sixth to second in the championship standings in a crushing weekend that took his F3 win tally from zero to two within the space of five hours.

Tim Macrow finished second to give Team BRM a 1-2 result and he extended his championship lead from two points to seven while Ben Gersekowski was superb en route to third place – his maiden Formula 3 podium finish – for Gilmour Racing.

“I hadn’t even thought about it before today,” Foster said.

“To be second in points behind Tim going into the next round is exciting for all of us and now we have to keep scoring points and getting trophies.

Foster led BRM to a podium sweep out in the race to give Team BRM its milestone triumph after the team was first formed in 1999.

He set a lap record in 1:05.2565s in the Mygale chassis ahead of Tim Macrow and Jordan Oon.

Senna’s first ever win in a racing car was with BRM on the 2006 Australian Grand Prix undercard.

“It’s a big milestone for our family and the group of people that we have been fortunate enough to work with over the years – and those who work with us at present.

“We’re really proud of the brand Team BRM has established and our reputation within the sport as a successful, professional outfit that always strives to present and operate at the highest levels.