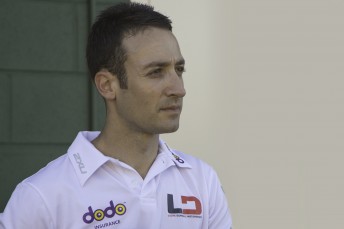 Dean Fiore has called for an urgent safety review after his horrifying impact into an earth filled tyre wall at the Top End circuit.

A series of incidents which started coming out of turn one ended with Fiore’s Dodo Racing Commodore slamming into the barrier before being launched momentarily on its side.

“I was taking evasive action then I’ve hit that bloody wall which is not cool. I think Hidden Valley need to do something about it to be honest,” Fiore told Speedcafe.com

It was announced a few weeks ago that the Northern Territory government has allocated almost $9.5million toward upgrades to the Hidden Valley circuit over the next two years.

“An earth embankment laced with rubber tyres … it’s always going to do that when you hit it.

“It would be much better off being an armco or a concrete barrier which you hit and you bounce along.”

“It makes the stop so harsh when you hit what is there now.”

“I’ve had a look and the car doesn’t look to be that nice. Probably needs to be chopped off at the front and rejigged.”

James Moffat has described the Race 19 melee as the biggest accident of his V8 Supercars career as teams count the cost of a mounting damage bill.

“It’s certainly the biggest hit I’ve had in a V8 Supercar,” said Moffat.

“It caps off our weekend, really. We haven’t been competitive.

“Having a look at the car back in the garage it does not seem as bad as I thought. It just looks like a lot of bolt on stuff hopefully.”