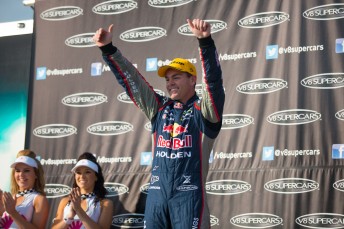 Craig Lowndes received a boost to his Championship hopes by scooting to a thrilling victory in a shortened Race 19 at Hidden Valley.

In what was a topsy-turvey weekend for Lowndes he managed to stave off a barnstorming finish by Mark Winterbottom who had been buoyed by victory in the previous race.

David Reynolds finished third in a race that was red flagged less than 30s after it started. The race was ultimately abbreviated to 24 laps from the scheduled 35.

It was Lowndes’ third race win of the year as he made some valuable gains on his Red Bull Racing Australia team-mate Jamie Whincup.

“With all the accidents and safety cars that went on at the start of the race we knew it would be a reduced race. We thought we could push on but we pushed it a bit hard. We burnt the rears up quite quickly and with that Frosty pounced,” Lowndes said.

“I knew he would come but not that fast.”

The series leading Whincup copped a pit lane penalty for spinning rear wheels before the car landed back on the deck after its service.

Most of the field had pitted early after the race was restarted with Whincup pitting on lap 3 as his race was about to turn sour.

The race was delayed again when HRT driver James Courtney came to a stop on the side of the track on lap four bringing out the safety car for three laps.

Lowndes dominated the heat but was fighting for grip in the closing laps with Winterbottom sensing he could claim his second win after a disastrous opening to the weekend by taking out David Reynolds in Race 17.

The race began with a nasty multi-car shunt when Scott McLaughlin and Jason Bright were involved in a bumping dual with Tim Slade spinning and causing a chain reaction of accidents him them.

The incident had its beginnings coming out of turn one and finished just short of turn five through the complex section of corners.

Dean Fiore slammed into an earth-filled tyre wall with the impact flinging the Commodore on its side.

A total of seven cars were eliminated in the accident with Slade, Fiore, David Wall, Alex Davison, James Moffat, Lee Holdsworth and Alex Premat on the list of early retirements.

Todd Kelly and Chaz Mostert were involved in a series of duals in the closing stages with Mostert shoved off the track after the pair had been rubbing and bumping in the lead-up.

Then Mostert bumped Kelly, turning the Jack Daniels driver sideways and off the track onto the grass on the final corner. Mostert was classified in 17th and Kelly in 20th.

“We should have been miles further up the road than all of that agro,” Kelly said.

“I lost a few spots in that safety car period that put me back, but the car was well and truly faster than the guys in front, but we’re just so vulnerable up the straight that I got gobbled up again and moved back even more.”