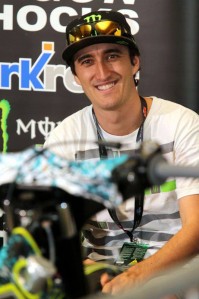 Chris Holder has moved to 3rd in SGP standings

Australia’s Chris Holder has moved within striking distance of the World Championship lead after a stunning Polish Speedway Grand Prix in Gorzow, won by Jarek Hampel.

Finishing a brave third was Brit, Tai Woffinden. Following his crash at the British Grand Prix two weeks ago, Woffinden underwent surgery on his collarbone and wasn’t given clearance to race until Thursday. He was in tears after his semi-final win over Greg Hancock from the pain he was suffering. He was reportedly in agony between races with pain.

Qualifying for the final from the semi ensured that the Perth raised youngster kept the pressure up on Sayfutdinov. The Russian finished third in that semi-final, however he dropped just a single point in his heat races and was the highest scoring rider overall, banking 15 points towards his World Championship – three more than Woffinden and one more than Holder.

Nuggety Dane, Nicki Pedersen missed his first semi-final berth of 2013, bowing out with just eight points to his credit. Holder and Hampel advanced past him in the World Championship pointscore.

The passionate Polish crowd were thrilled with a home town victory and a difficult race track ensured that the racing was entertaining throughout the night.

Hampel took his win number up to two for 2013. Despite he and Emil Sayfutdinov being the only two riders having multiple wins this year, it is still one of the most wide open World Championships in the Grand Prix era.

At the end of the event, Sayfutdinov holds an 11 point lead over Woffinden, with Holder now five points behind the Englishman and Hampel a further two points back.

The next round will be June 29 for the Danish Grand Prix in Copenhagen.