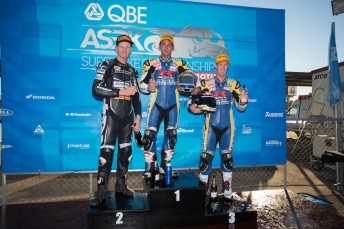 Suzuki’s Robert Bugden became only the third rider to win a race in the 2013 Australian Superbike Championship with victory in a drama filled second encounter at Queensland Raceway.

The Brisbane rider managed to hang on despite coming under relentless pressure from Josh Hook and Wayne Maxwell to secure a victory and a 1-2 for Team Suzuki in front of his home crowd. Championship leader Glenn Allerton had an eventful race as an ECU failure on the grid saw him battle to fourth after starting for the rear of the field.

Bugden couldn’t hide his delight in Parc Ferme and he believes the victory can kick start his 2013 title push.

“We’ve proved that it is every bit as good as any other bike out here. To get the race two victory is nice but it would have been good to go head-to-head with Glenn (Allerton) but it wasn’t to be. It is certainly a day I will remember for a very long time.”

“It was a tough race and I played it different to the first one but I could see them in the shadows so I knew they were not far behind. I think this kick starts my championship push now and hopefully this is the first of many wins.”

Even before the race began there was drama as race one winner Allerton pulled up on the grid motioning a problem with his bike. A faulty ECU prompted a switch to his second machine, but in doing so the NextGen Motorsports BMW rider was forced to start from the rear of the field.

The empty space on the front row helped Bugden storm into the lead at the first corner and he was followed by Team Honda’s Hook and Maxwell. However, all eyes were on

Allerton as he produced a stunning lap to climb to 12 positions to slot into fourth at the end of the opening lap.

A quartet of Bugden, Hook, Maxwell and Allerton broke away from the rest of the field battling hard in the early stages. On lap four the yellow flags came out as Ben Henry suffered a nasty crash at the final corner. The CUBE Racing rider walked away unscathed but his Suzuki launched over the spectator fence. Luckily no one in the crowd was injured.

At the front, only a second covered the top four and Bugden came under serious pressure from Hook, Maxwell and Allerton. As the laps disappeared, Allerton dropped back and a three bike race emerged for the victory.

But Bugden remained calm and he went on to take the victory. Team mate Maxwell pushed to the very last corner and was rewarded by slipping past Hook for second to complete a Suzuki 1-2. Hook was left to settle for third ahead of Allerton and Jamie Stauffer.

The Australian Superbike Championship heads to Sydney Motorsports Park for Round 4/5 on August 1-4.