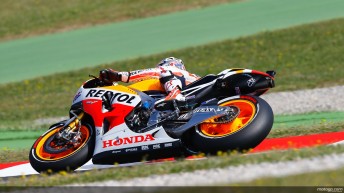 The Honda man, helped by scorching temperatures at the Barcelona circuit, managed to squeeze everything out of his machine to set a stunning 1:40.893s, breaking a five-year-old record set by Australian MotoGP champion Stoner by nearly three tenths.

Britain’s Cal Crutchlow continued to impress on the Monster Yamaha to pip Yamaha’s Jorge Lorenzo, who endured a troublesome session, to second on the grid.

The session, held in blazing sunshine, began with another Spaniard lighting up the timing screens in the form of Marc Marquez. However, his time was soon eclipsed by a fired up Crutchlow.

Elsewhere on the circuit Lorenzo, one of the favourites for pole, was having problems as he dived into the pits unexpectedly early on. The clearly frustrated and unhappy Spaniard was forced to switch to his second bike citing clutch problems with his number one machine. He rejoined the session with nine minutes remaining.

While Lorenzo was in the pits, Pedrosa moved into provisional pole with Crutchlow in second and Ducati’s Andrea Dovizioso in third. Valentino Rossi was also finding lap times hard to come by on his Yamaha and could only post a time good enough for fifth after his first run.

The passionate Catalan crowd soon rose to it’s feet when Pedrosa produced a moment of magic with a record breaking lap time. The 27-year-old, who grew up just 30 minutes from the circuit, bettered his personal best time by a whopping six tenths, breaking the lap record, set in 2008, in the process.

With time ticking away, Lorenzo posted a last gasp effort to move into second but he was relegated to third by Crutchlow. But as the chequered flag came out there was nobody to deny Pedrosa pole at his home circuit.

Alvaro Bautista was fourth fastest ahead of Ducati’s Nicky Hayden while Marquez completed the second row of the grid. Rossi finished the session in seventh, Andrea Iannone eighth, Dovizioso ninth and Stefan Bradl rounded out the top 10.

Australia’s Bryan Staring will start from 22nd on the gird on board his Honda Gresini CRT machine.