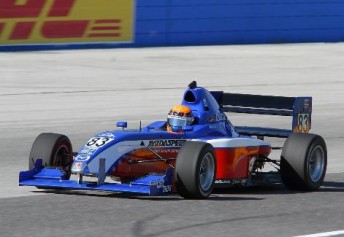 Matthew Brabham was the class of the field at Milwaukee

Matthew Brabham has continued his dominant run in the Pro Mazda Championship easily winning at the Milwaukee Mile.

The third generation racer backed-up his pole position at the sixth round of the US series leading from the outset to score his fifth win of the season.

Brabham had cleared out to 14-second lead before a caution with 20 laps from the finish. Even after the field was bunched, the Australian had no issues as he once again drove away to take the chequered flag after 90-laps of racing by just under 10 seconds from Juan Piedrahita.

“It was an absolutely fantastic race,” said Brabham.

“It went all to plan and the car was great. I can’t thank the team enough. The guys at Andretti have been working really hard all year and everything is just falling into place for us.

“We were quick every session and we managed to keep on top of the changing conditions on the track, which was the main goal for us because we knew we had the car speed. It was a good, long tough race. It also goes slower when you are out in front.

“This is great for the championship and I couldn’t be happier.”

The Pro Mazda Championship runs on a mixture of road, street and oval tracks, with the 19-year-old Andretti Autosports driver being the class of the field on all layouts. This weekend it is on the same bill as the IndyCar Series and the same will be in seven days time on the streets of Toronto.

Brabham’s fifth consecutive victory vaults him to a 49-point advantage over Diego Ferreira (135) in the standings with Shelby Blackstock (118), Spencer Pigot (111) and Scott Anderson (95) in a tights point battle for third.