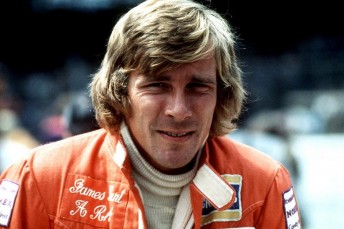 There have been 20 World Champions crowned since the sudden death of British playboy driver James Hunt.

At 45 years of age Hunt died at his home on June 15, 1993, a day after proposing to Helen Dyson whom he had met a few years earlier at a restaurant in Wimbledon where the cavalier racer had lived.

He had been married twice before to Suzy Miller who left him for the actor Richard Burton in 1975 and then to Sarah Lomax from whom he divorced in 1989 after six years of marriage.

Hunt’s death rocked the motor racing world where the hell-raising racer had mellowed somewhat from his days as a hard-drinking, drug-taking, chain-smoking womaniser.

Hunt was the second eldest of six children born on August 29, 1947. He was sent off to boarding school at the ripe age of eight. 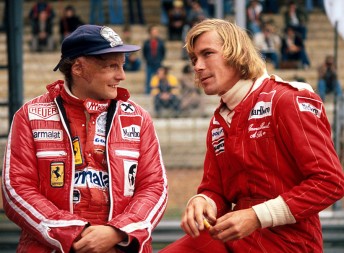 When he turned 18, Hunt had decided that he was going to be a racing driver, much to the horror of his parents.

By 1967 he had raced a Mini among other conveyances and in those teeth-cutting days he acquired the rather undignified nickname ‘Hunt the Shunt’ because of his regularity at bending equipment.

Hunt would enter F1 in 1973 when Lord Hesketh purchased a March chassis. He would remain with Hesketh until the end of 1975 when he moved to McLaren.

In 1976 Hunt won the World Championship, capitalising on the tragic accident which befell Niki Lauda at the Nurburgring when the Austrian was almost burnt to death.

It was the rivalry between Hunt and Lauda which director Ron Howard will take to the silver screen later this year in the much anticipated film Rush in which the British driver will be portrayed by actor Chris Hemsworth.

As unsavoury as many were, one of the most refreshing points about Hunt’s career and life is that very few stories had been left untold.

In the build up to the title in 1976, Hunt went on a drug and sex bender in Tokyo for a period of two weeks in a preparation only Hunt could conjure.

In that final of the season, Hunt would finish third behind Mario Andretti and thereby beat Lauda to the title by a solitary point.

During a revealing interview with this author a couple of years after Hunt’s death, F1 commentating doyen Murray Walker spoke of how in 1979 when the BBC hired him to be his co-commentator, the relationship got off to a frosty start.

“Here we were in this little tiny little box at the Monaco Grand Prix and James climbed up the stairs with a bottle (red wine) in hand reeking of alcohol,” Walker explained.

“He smoked like a chimney, drank like a fish, took drugs, was a womaniser and I didn’t like his morals because he didn’t seem to have any.

“We never really got on but in later years James had mellowed quite a bit to the point where we actually enjoyed each other’s company.”

Hunt developed into a respected voice alongside Walker, forming opinions on drivers and launching scathing attacks on drivers for questionable moves on the track. He added colour and spice to Walker’s sometimes whimsical calls and threw in the odd bit of humour at the right moments.

It could be said that some of the respectful and moralistic ways of Walker had eventually rubbed off on Hunt.

In the end Hunt’s over indulgent life had caught up with one of the original playboy drivers of the grand prix circuit.

Hunt had packed many lives into his 45 short years.

He had managed to pocket a World Championship and 10 grand prix wins during his career in F1 that spanned from 1973 to 1979 when he served for the Hesketh, McLaren and Wolf teams.

Hunt paid the ultimate price for his abusive days, checking out as a young man and not having the chance to age gracefully.

VIDEO: Clash Of The Titans