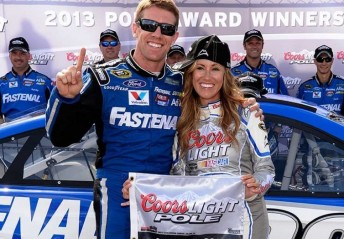 “I don’t think that is as fast at Marcos Ambrose ran, but that is fast for me,” said Edwards.

“I don’t think I could go any faster if I ran it again.

“It is so fast. It is hard to describe what it feels like to go through the corner that fast in a 3,500 lb stock car. It feels like an IndyCar looks to me. I don’t know what those feel like but it stuck.”

“Hopefully we can put a Roush Fenway Ford in victory lane.

The Roush Fenway Racing driver managed to hold off a challenge from Kurt Busch, with Kasey Kahne and Paul Menard to start from the second row.

Defending race winner Dale Earnhardt Jr. was 12th, while points leader Jimmie Johnson was 17th. For all of Johnson’s success, he has never won at Michigan.

Ambrose will have to work his way forward from 23rd.

“We were pretty loose that lap,” said Ambrose.

“It just wasn’t that good and we’ll have some work to do on Sunday. But, we have seen speed in the car. We should be able to race to the front on Sunday and hopefully challenge for a win.”