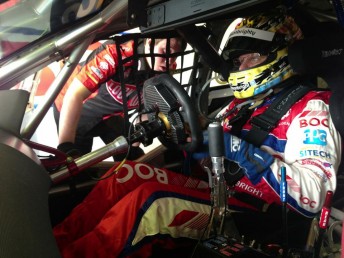 Jet-setting driver Jason Bright will approach officials for permission to be excused from podium duties if the need arises at the SKYCITY Triple Crown at Darwin.

Bright is booked on a 6.20pm flight from Darwin to Singapore tomorrow leaving him less than 90 minutes to scamper from Hidden Valley to the airport.

The experienced Brad Jones Racing driver has finally found holes in his V8 Supercars schedule to be clear to make his debut in the Le Mans 24 Hour race from June 22-23. He has had opportunities in the past including with the Prodrive-run Aston Martin operation but V8 Supercars commitments stood in the way.

As part of the lead-up to the classic La Sarthe race drivers and cars gather for the two scrutineering days in the centre of the city.

Bright will miss the unique scrutineering if he does not make his flight from Darwin to Singapore and then link with his connecting flight to Paris.

“They really frown upon it if you are not there at scrutineering. So if I get that flight it gets me into Singapore and then to Paris on time and then the TGV (fast train) to Le Mans. If I miss the flight I will be a day later,” Bright told Speedcafe.com

“I’ve managed to pull enough strings to make sure I get there.”

With time critical Bright cannot afford to take part in the podium and any subsequent media commitments if his performances land him in the top three.

“We haven’t talked about that (podium). I still need to meet with the officials about it.

“It would be pretty ridiculous if they stopped me. At the end of the day if I pull into the pit box and jump out of the car and then Brad (Jones) has to go and do the interview and stand on the podium it will be all good.”

Bright has clocked up decent frequent flyer miles since Austin, trekking to England and Malta and then to Le Mans last weekend for testing where he performed compulsory rookie laps.

“The priority was to get me enough laps to get used to the track because its such a big track. I did 15 or so laps in the wet and 10 laps in the dry with a wet set-up on old tyres. Then I got four laps on new tyres with a dry set-up,” the 40-year-old said.

“On the whole I think we are looking okay. The Astons look very fast but as the week goes on we will get pretty close to them.

“I walked the portion of the track from the Porsche curves through to the Mulsanne straight and that whole section is awesome.

“The most difficult section for me was the Porsche curves because of the sequence of corners. As soon as you go one section faster it’s hard to know how hard you can push in the next section.

“Now that I’ve driven on the track and looked at a bit more video its started to make a lot more sense.