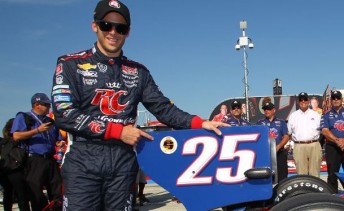 Marco Andretti has led an Andretti Autosports one-two in qualifying for the ninth round of the 2013 Izod IndyCar Series at the Milwaukee Mile.

Andretti, who had earlier topped both practice sessions, proved 0.025s quicker than team-mate James Hinchcliffe, who had set the benchmark for much of the one-at-a-time session.

“I thought we might have enough for pole today but I made a little mistake on the last lap and we just missed it,” said Power, who sits a dismal 12th in points heading to Milwaukee.

“I think the Verizon Chevy will be pretty good in the race. We’re not sure what the weather will be – we hope the rain stays away, especially for the fans – but it should be a good race.”

Andretti meanwhile is second in the standings to Power’s Penske team-mate Helio Castroneves and is hopeful of breaking a 31-race winless streak this weekend.

“So far, that was about as good as we could run, so I’m pleased,” he said after becoming the sixth pole winner of the season.

“I think the RC Cola car will be tough to beat, which is obviously why we come here, but if we can grab a (bonus) point let’s do it.

“A win would be huge. I told Dad that hopefully (the pole) is only half of his Father’s Day gift.”

Ryan Briscoe, returning to the Panther Racing entry for Milwaukee, will start 19th.