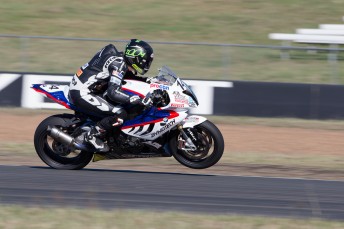 NextGen Motorsport’s Glenn Allerton continues to be the man to beat as he topped the timesheets in the first Australian Superbike Championship qualifying session at Queensland Raceway.

The 2011 champion has been setting a blistering pace around the 3.12km Ipswich circuit in practice and he confirmed his speed was genuine in qualifying. The BMW rider was the only rider to dip into the 1 minute 8 second bracket during the 30 minute session.

Allerton was quick from the outset and just seemed to have the edge on the rest of the field posting a 1.08.689s lap to secure the top spot. Team Honda’s Josh Hook was the New South Welshman’s nearest challenger a further five tenths back.

Brisbane’s Robbie Bugden was third fastest on his Suzuki just a tenth behind Hook and in front of Phillip Island winner Wayne Maxwell, who was fourth. Jamie Stauffer made sure both Team Honda entries were in the top five finishing ahead of Linden Magee, Chas Hern and Beau Beaton. Sean Condon and and Glenn Scott rounded out the top 10.

A field of thirteen riders will compete for the all important pole position in this afternoon’s Superpole session, meaning Phil Lovett, Brayden Carr and Chris McMillan miss out and will start the race from the back row.