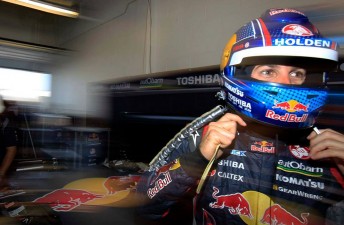 V8 Supercars Championship leader Jamie Whincup claims that ‘outside influences’ were a factor in the restart penalties he and team-mate Craig Lowndes received in Austin, Texas.

Fabian Coulthard was allowed to keep his win in Race 15 despite triggering a litany of errors from the field behind the Safety Car when he was called to accelerate by his engineer before the Safety Car had peeled into pitlane.

At a subsequent hearing Coulthard, Whincup and Lowndes were all docked 30 Championship points. The Red Bull duo had been second and third behind the BJR driver at the time of the restart.

“I’m not disputing Fabian’s win at all, (but) what I am saying is that I was on the receiving end of what I believe was the worst judicial decision in my career without doubt,” Whincup told Speedcafe.com ahead of this weekend’s return to racing in Darwin.

“For the system to make such a bad call it’s obvious to me that there’s some outside influence from somewhere else.”

The two fundamental rules drivers must abide by under a Safety Car restart are that they maintain speed and maintain a maximum of five car lengths for any car following the leader.

However it is not written into the rulebook that the leader sets the pace which has exposed a loophole that led to Whincup’s explosive reaction in the wake of the Austin situation.

“They (officials) know that Lowndsey and I were in a no win situation and instead of using common sense they decided to use the lack of explanation in the rules to apply the penalties,” Whincup continued.

“They have now addressed the issues and changed the rule book moving forward but haven’t given us our points back.”

The key change that has been made to the restart rules comes under 11.4.11 of the sporting regulations, which has been adjusted to read “All cars will be required to maintain the prescribed speed +/- 5km/h except if to close the gap to the car in front.”

“As far as I’m concerned most of the field had accelerated but they decided just to pull the two cars behind Fabian in and penalise us and no-one else,” added Whincup.

Whincup is also seething that he was allegedly told ‘don’t worry about your 30-point penalty because your two main rivals have got penalised’ (Coulthard and Will Davison, who was docked 25 points for reckless driving in a Race 16 incident that took out Scott McLaughlin).

“We work our butts off especially in Austin where the cars are so hot, you are fighting for every position you get and they want to take 30 points off you and they think ‘don’t worry guys the others have got 30 points taken off as well’,” said Whincup.

“The point is it’s not fine. Every point matters in this business. ”

Whincup will prepare to defend his points lead over Lowndes at the Hidden Valley circuit in Darwin this weekend, ironically a venue where he was involved in a restart drama in 2011 with Mark Winterbottom and Shane van Gisbergen.