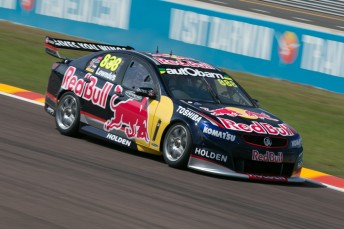 Initially it was thought to be a problem with the gearbox which has been a problem on the #97 Commodore since the opening round in Adelaide.

van Gisbergen ran around on wet tyres before changing to slicks when the problem struck as he changed to sixth gear in the main straight.

The Tekno team change the transaxle in between sessions with van Gisbergen thankful it did not occur during the race.

“I’m just happy it didn’t happen in the race. I just heard a bit of an explosion as I put it into top gear down the main straight,” van Gisbergen said.

The session was topped by Craig Lowndes in the Red Bull Racing Australia Commodore from Jason Bright and Mark Winterbottom.

See below for full practice 2 results