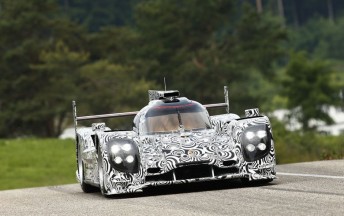 An official image of the Porsche LMP1 car on track

Porsche’s new LMP1 hybrid has enjoyed a maiden track hit-out just over a year out from the company’s first outright assault on the Le Mans 24 Hours since 1998.

The car completed a shakedown at the German marque’s test track in Weissach with long-time Porsche factory driver Timo Bernhard at the wheel.

The Porsche Le Mans program was first announced in 2011 and is now said to have some 200 staff working on it.

The car wasn’t expected to be seen for the first time until next month, leaving Porsche’s LMP1 project head Fritz Enzinger happy with his squad’s progress.

“We are well on schedule,” he said.

“Our newly formed team has worked with utmost concentration on getting this highly complex vehicle on the track as soon as possible.

“This allows us a few additional weeks for more testing and further development. From 2014, the regulations are primarily based on efficiency.

“This makes the competition amongst engineers more interesting and presents us with completely new challenges.”

Bernhard and Romain Dumas are the only two drivers confirmed to race the cars next year, although Mark Webber and Neel Jani have continually been linked to the remaining full-time World Endurance Championship seats in recent months.

Porsche is yet to reveal the complete technical specifications or a name for the car that it hopes can topple existing players Audi and Toyota next year.