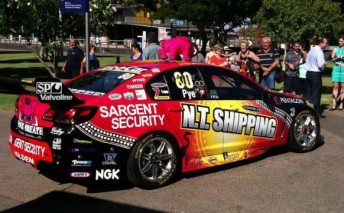 A group of companies from the Top End have taken over naming rights sponsorship of Scott Pye’s Holden Commodore for the Skycity Darwin Triple Crown event at Hidden Valley this weekend.

Headed by NT Shipping, the agency which looks after gas and oil in Darwin, the unique sponsorship arrangement has been formed to back the Lucas Dumbrell Motorsport driver for a one-off weekend.

Although some territory firms have afforded part backing to teams in the past this is the first time NT-based companies have taken over major backing of a V8 Supercar since the series first staged a round at the 2.9km circuit in 1998.

The package was put together by an experienced motor racing sponsorship company, Sports Connection.

“There’s a few mates of mine and we all do business together on a daily basis and we all got together to do this deal. It gives us all something to cheer for,” NT Shipping boss Peter Mules said.

“All of us love our V8 Supercars and we love our Holdens. “I’m a very proud Territorian. But to be honest it’s not about me, it’s not about advertising or getting my name out there. It’s all about helping the young fella Scott Pye who is only 23 and this is his first year in the big game.”

The Pye Commodore has been entered under the banner of NT Racing for the three-race meeting.

The #80 Holden has gained plenty of attention this season after Pye was lucky to escape serious injury when the brakes failed as he slammed head-on into a tyre barrier at Symmons Plains and then when he escaped a high speed slide and momentary ride through the air at Barbagallo.

The NT sponsorship package for the Darwin weekend replaces the finance and investment business Ekol which has been the primary backer on the #80 car this season.