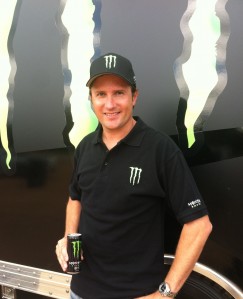 Australian journeyman Owen Kelly will reignite his NASCAR career with two appearances for Joe Gibbs Racing in the United States over the next few months.

Busch has become one of NASCAR’s biggest stars and was eager to sign Kelly to complement his team’s 2013 campaign after the Tasmanian qualified his car at Montreal last year.

Kelly had his first taste of NASCAR action in 2010 when he drove a Baker Curb entry to fifth place in a Nationwide race at Road America.

He was then hired to qualify the Nationwide entry of countryman Marcos Ambrose for Richard Petty Motorsport at Montreal, Canada, in 2011 – qualifying the entry in ninth, while Ambrose completed his Sprint Cup commitments at Michigan.

Ambrose arrived in Montreal 20 minutes before the race, which he went on to win.

Kelly’s efforts caught the eye of Busch who hired him to qualify his Monster Energy car at last year’s Montreal event while he completed his own commitment at Michigan.

Kelly qualified the car fifth and Busch was on target to take the win when a late-race puncture forced him to finished 10th.

“For me, NASCAR has always been the pinnacle of motorsports and to have another opportunity with a team the calibre of Joe Gibbs Racing and Kyle Busch is great,” said Kelly.

“I enjoyed qualifying the car for Kyle last year and for him to give me the chance to race for them this year gives me a real chance to keep my dream of a full-time NASCAR ride alive.

“It is now up to me to repay their faith and to go out and get the job done for JGR, Kyle, Monster and Toyota.”

Kelly, 33, started his career in karts at the age of nine and has one of the most comprehensive careers of any Australian racer with experience in Formula Ford, Porsche Cup, 2-litre Super Tourers, New Zealand V8 SuperTourers, Sprintcars and V8 Supercars in Australia.

His US experience includes Grand-Am, Late Models and NASCAR Nationwide.

Kelly moved to Charlotte North Carolina in 2008 to head-up Dale Earnhardt Jr’s late model team at Mooresville and completed a successful season in the Whelen All American Series – winning the Mid-Atlantic Championship 350.

The following season Kelly campaigned Jr’s entry in the UARA-Stars Championship before returning to Australia for the V8 Supercar endurance season.

Kelly, who has become one of Australia’s most respected drivers, has driven for Kelly Racing in the last three Bathurst 1000s, but says he has retreated from his endurance opportunities this year to concentrate on his US commitments.