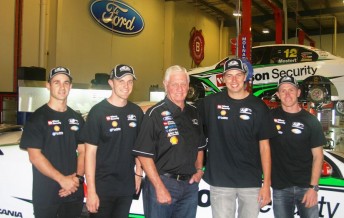 Hot on the heels of confirmation that Steven Johnson will drive with Erebus Motorsport at this year’s endurance races, Dick Johnson Racing has announced its full co-driver line-up.

Walsh and Wood currently occupy the top two places in the Dunlop Series standings – a series that Mostert himself had been the favourite to win prior to his move into a full-time seat with DJR.

“This the first time we have ever gone to the long distance races with a bunch of young guys in both cars,” said Johnson.

“We have had some great names at DJR over many years including JB (John Bowe), Paul Radisich, Gricey (Alan Grice) and Alan Jones. But the team is entering a new phase and these guys (Walsh and Wood) are the future of the sport.

“There is plenty of pressure on them for sure, but we will guide them through all that and see how they perform. As a team owner I am really looking forward to it”

Walsh meanwhile says that securing the drive alongside Blanchard is a reward for the hard work he has put in.

The 25-year-old is currently competing in his third Dunlop Series season, while his background includes two stints in Australian Formula Ford that was split by a foray into Formula Renault in Europe.

“We have worked very hard this year to get on the radar of the main game teams,” he said.

“I am rapt to be making my enduro debut with a team like Dick Johnson Racing.

“I believed my Dunlop Series form would have a bearing on this season so it has now come together really well.

“I am very grateful to Dick and the whole DJR Wilson Security team for having faith in me. Tim and I get on well so I am very confident we can really do a good job for the team.”

Wood, who turned 30 on Sunday, has enjoyed starts in the 500km and 1000km V8 Supercars enduros in each of the last five years, making his debut with Tasman Motorsport before undertaking two-year stints with Kelly Racing and most recently Tony D’Alberto Racing.

“I am sure that Chaz and I can really surprise a few people,” he said of this year’s campaign.

“There is no more famous team than Dick Johnson Racing when it comes to Bathurst so I am really proud to be part of the 2013 line up.”