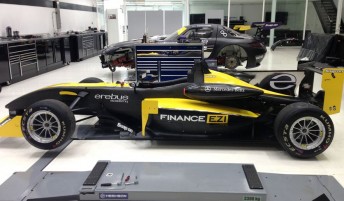 The Mygale that Heimgartner will race at Hidden Valley

Dunlop V8 Supercars Series regular Andre Heimgartner will drive the Erebus Academy Mygale in this weekend’s third round of the 2013 Formula 3 Australian Drivers’ Championship in Darwin.

Heimgartner, who last year completed a full season in the Carrera Cup Australia after his own stint in Formula Ford, is this year combining a Dunlop Series season and a V8 SuperTourer program in his native New Zealand.

The F3 deal is being described as a one-off at this stage, with Heimgartner emphasising his desire to learn the Hidden Valley layout as he builds towards a career in the V8 Supercars Championship.

Heimgartner tested the Mygale for the first time at Winton last week and says he expects to run competitively against the F3 field.

“It was a great experience to get behind the wheel of the Erebus Mygale at Winton, but it was also a real challenge,” he said of the test.

“Getting your mind back into thinking about aero grip is vastly different to the recent tin-top experience I’ve been getting over the last 12-18 months.

“You have to remind yourself that these cars are better the faster they go, and remember the philosophy that the faster you go, the more downforce the car generates, so the better your lap time.

“We got five sessions at Winton, and by the end I was happy with my pace. As to what I’ll discover at Darwin, I guess I’ll soon find out, but I expect we’ll be competitive. Whether that means I’m at the front of the field, only time will tell.”

“Our aim was to fill the seat in the Formula 3 with a driver of a similar calibre (to Le Brocq) to continue on the great work that Jack did at both Bathurst and Symmons Plains,” he said.

“He was immediately up to speed at Winton and right on the pace we’d expected despite limited time in the car, and as a two-time Formula Ford champion with Mygale, he knows that team well, and that will only make his transition to F3 easier.”