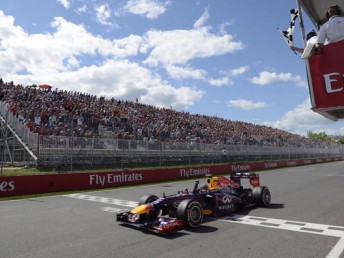 Sebastian Vettel continued to open up his advantage in the 2013 FIA Formula 1 World Championship after a masterful performance on the Isle de Notre Dame outside Montreal taking a comfortable victory.

Astonishingly, it was Vettel and Red Bull Racing’s first ever win in Canada.

From the start, he tore away from pole and it never looked like being anything but a lights to flag victory for the German World Champion, lapping everyone up to fifth place!

The battle for second and third was the highlight of an unusually dour Canadian Grand Prix.

Mark Webber was in the thick of it battling it out with Nico Rosberg whilst Lewis Hamilton was well in second placing. The scrapping between Webber and the last round winner enabled a quick Fernando Alonso into striking distance.

Once Webber cleared Rosberg, Alonso was able to do the same, then disaster for the Australian when lapping Giedo Van de Garde, the Dutchman closed down on him knocking the endplate off Webber’s wing. Subsequently, the Caterham driver was given a 10 second stop and go penalty only to meet his fate after another collision with Nico Hulkenberg – both watching from the sidelines.

Webber continued on, however crossed the line fourth establishing the fastest lap of the race despite the damage to the wing.

The Mercedes-AMG charge drifted off the cliff again, Alonso able to close down on Hamilton and have a crack at the Englishman with eight laps to go. After a battle into the hairpin where Hamilton pushed the Spaniard wide, Alonso steeled himself for a DRS-assisted charge to turn one, the pair coming perilously close to colliding, but Alonso was able to get the place and keep in touch with the World Championship.

Across the line in sixth was an excellent Scuderia Toro Rosso of Jean-Eric Vergne, whilst his Australian team-mate Daniel Ricciardo had a less than happy day finishing well outside the points in 15th.

Paul Di Resta made a mockery of the Pirelli criticism. Starting towards the back after yesterday’s qualifications, he did 57 laps on the Medium tyre before placing himself on the Super Soft for the run to the end. He was rewarded with seventh placing.

Felipe Massa got past Kimi Raikkonen entering the very final lap for eighth after a strong battle. Raikkonen will not be happy with his ninth placing after a difficult day which included a bungled pitstop from the Lotus F1 Team crew.

The final points place, somehow, was awarded to Force India’s Adrian Sutil. Sutil’s day included a spin after a collision with Pastor Maldonado. Unfairly in many’s eyes, the German was blamed for the incident and forced to perform a drive through.

Throughout the troubles he faced, Sutil also suffered a damaged rear wing!

The inseparable McLarens continued their battle, this one falling the way of Sergio Perez, the chromed machines being the first outside the top 10.

Romain Grosjean completed a frustrating day for Lotus in 13th with Valtteri Bottas dropping from third on the grid to 14th, Ricciardo and Maldonado ending the finishers.

Vettel’s lead in the World Championship has now extended to 36 points over Alonso who has deposed Raikkonen from second position. Webber is currently fifth some 63 points behind his RBR team-mate and Daniel Ricciardo sits 14th in the Championship overall.

The next round of the World Championship will be held at Silverstone in Great Britain in two weeks June 28-30.