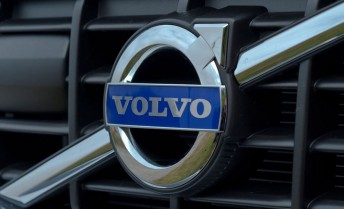 Like all marques outside of Ford and Holden, Volvo’s representation in Australian circuit racing has been sporadic over the years.

An array of privateer production car, Sports Car and Sports Sedan efforts were seen throughout the 1960s and 70s, but it was not until the international touring car formulas – Group A in the 1980s and Super Touring in the 1990s – took hold that Volvo Australia itself showed a serious interest.

It follows that the manufacturer’s attention has been captured once again by the advent of V8 Supercars’ Car of the Future regulations, which has already seen Nissan and Mercedes-Benz (through a privateer effort) re-enter the Australian touring car fray.

As reported last Friday, a link-up with long-time Holden team and former Super Touring rivals Garry Rogers Motorsport is understood to be in the final stages of sign-off with Volvo. The program is expected to be launched on June 17.

Here we look at the four Volvo racing cars from the Group A and Super Touring eras, and ask you to vote on which was the most iconic through this week’s Pirtek Poll.

The introduction of Group A regulations into the Australian Touring Car Championship for 1985 gave the domestic class an international flavour like never before.

The epitome of the new-look was Mark Petch Racing’s Volvo 240T. The left-hand-drive car was imported from Belgium at the end of the 1984 European Touring Car Championship season, winning its first race in Australasia, Wellington’s Nissan Mobil 500, in the hands of local driver Robbie Francevic and Belgian Michele Delcourt.

The 240T eventually made its Australian debut in the second race of the 1985 ATCC at Sandown with Francevic at the wheel. The turbocharged car’s devastating straight line speed made it an instant contender.

The season netted two race wins and fifth in points for Francevic; the combination of the car’s unique strengths and weaknesses and the Kiwi’s robust driving having caused quite a stir. The likes of Dick Johnson and Frank Gardner had quickly taken to referring to the car as a ‘block of flats’ due to its blunt styling and poor corner speed.

Francevic would be joined by young open-wheel ace John Bowe for Bathurst, but the car struck mechanical dramas and failed to finish.

The team morphed into a factory operation early in the following season, sporting a fresh Volvo Dealer Team livery from Round 3 onwards. The deal between Petch, Volvo Cars Australia and the Volvo dealer network had seen Petch sell the team, with the dealers of Australia and New Zealand now contributing a reported 40 percent of the team’s season budget.

John Sheppard took over the reins of the outfit, and it proved a winning formula, with Francevic eventually taking the title. A second, right-hand-drive, car was added for Bowe from Round 4 and the Tasmanian eventually finished eighth in points with a best result of third.

Francevic left the team prior to Bathurst following a disagreement with Sheppard. The team ran two cars at Bathurst regardless, chalking up an 11th (Graham McRae/Neville Crichton/John Bowe) with its second car after the lead entry retired.

The team was disbanded at the end of the season. 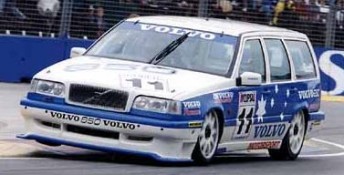 Volvo’s entry into the Australian Super Touring Championship in 1995 was an undoubted head-turner, with the manufacturer fielding the Estate version of its 850 model for the experienced Tony Scott.

The TWR-designed car had been campaigned in the previous year’s British Touring Car Championship as Volvo’s UK arm had favoured the marketing benefits of racing the wagon over the slight dynamic advantages of the sedan.

The car had not been a winner in Britain, and would not be in Australia. In truth, its under developed five-cylinder engine appeared to let the side down the most, with the car no match for its rivals in a straight line.

Scott eventually took eighth in the Australian championship behind his BMW, Audi, Opel and Ford competition. The car was run by George Shepheard, who had been contracted to kick-off Volvo’s production car efforts a year earlier. 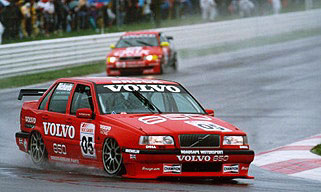 As it had done in Britain in 1995, the 850 sedan replaced the 850 Estate for the 1996 ASTC. There would be a high profile driver change too, with Scott out in favour of Peter Brock, who at that point was still two years away from retiring from his full-time ATCC seat with the Holden Racing Team.

Despite TWR being at the helm of both the Volvo BTCC and Holden ATCC programs, Brock’s move to have a foot in both camps displeased many in the V8 paddock, including Holden and HSV. Regardless, the veteran’s HRT contract had been ‘non-exclusive’ and he was free to drive for whomever he liked.

Once the racing itself got underway, it was a relatively low-key season for Volvo. Unable to keep pace with the factory Audis or BMWs, Brock was left to battle the leading privateers; eventually finishing sixth in points.

The 850’s only win for the year would come in a wet Sunday morning support race to the AMP Bathurst 1000. With Brock electing to focus on his duties with HRT, Jim Richards took over the drive for the weekend, using a combination of his renowned wet weather driving skill and the superior wet weather Michelins to devastating effect.

Volvo subsequently engaged in a large scale media spend publicising its Bathurst success ignoring, of course, that the field had been left for dead by the trio of factory BMWs in the earlier dry weather outings.

Richards returned to the team full-time in 1997 in place of Brock. The season began with another fine victory at Albert Park, but it would be somewhat downhill from there. With TWR’s BTCC outfit having already moved to the newer S40 model, development of the 850 had ceased, and fifth in points in was all that Richards could muster.

TWR flew out a newer 850 for the team’s two-car assault on the first Bathurst 1000 run to Super Touring regulations. Although without the speed to even make the top 10 in qualifying, the Jim Richards/Rickard Rydell and Cameron McLean/Jan Nilsson entries were fourth and fifth respectively by race end. 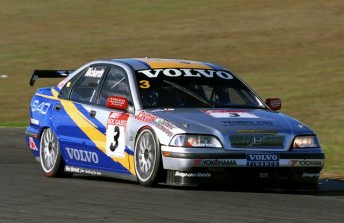 The S40, seen here at Oran Park in 1999, was the last of the Volvo Super Tourers

The sleeker S40 model was first seen in Australia for the start of the 1998 ASTC season, where a single entry would be campaigned by Richards. The combination proved good enough for third in that year’s Drivers’ Championship behind Audi duo Brad Jones and Cameron McConville.

Frustratingly for Richards, he had repeatedly showed superior speed to his rivals, but was consistently out-dragged to the first corner by the four-wheel-drive A4s. The S40 was most in its element on the flowing Phillip Island and Eastern Creek circuits, where Richards took single race wins.

That year’s Bathurst 1000 would provide the crowning achievement for Volvo’s 2.0 litre racing efforts in Australia. Fresh from victory in the 1998 British Touring Car Championship with Rydell, TWR brought its entire team, including its two cars, to Bathurst. Rydell joined Richards in the lead entry, while Nilsson returned alongside Brit Tim Harvey in the sister car.

Rydell took a stunning pole on Saturday before joining with Richards to see off a spirited challenge from a Nissan Primera driven by Steve Richards/Matt Neal in the race. The second S40 failed to finish after Harvey crashed on oil at the top of the Mountain.

The two Bathurst S40s stayed in the country for the following year’s ASTC. In the team’s final season of competition, Richards managed to beat both Audis in the Drivers’ standings, but fell an agonising two points short of BMW privateer Paul Morris.

The Volvo team, which had cycled Mark Williamson, Mark Adderton and Cameron McLean through its second car, eventually took the Manufacturers’ Championship honours. 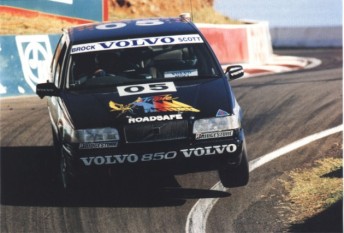 Volvo Australia took to production car racing in 1994 and 1995

A year prior to its 1995 entry into Australian Super Touring, George Shepheard Racing had prepared a series of 850 sedans for local production car competition on behalf of Volvo Australia.

The production car effort saw Volvo represented in a range of events including the Bathurst 12 Hour, Sandown 500 (which had a class for production cars in 1994), Australian Production Car Championship and Cannonball Run.

Although the factory effort ceased at the end of 1995, privateer Ian McAlister ensured the 850 would continue to be seen throughout the next two GTP seasons.

Privateer Volvo efforts can be seen sprinkled throughout earlier Australian motor racing history, with the late David McKay the most prominent proponent of the brand.

A Volvo dealer through his Scuderia Veloce Motors empire, McKay’s Volvo racing exploits were headlined by victory in the 1966 Lowood 4 Hour production car race. McKay’s 122S, which he shared with Bill Orr, beat factory Ford and BMC efforts to the unofficial line honours.

The 122S would also be seen at Bathurst between 1965 and 1967 with various drivers at the wheel. All enjoyed minimal success.

The marque made just one appearance at Bathurst between 1967 and Petch’s 1985 Group A effort. The 1979 race saw the almost comical spectacle of McKay teaming with Spencer Martin in a production-specification 242GT. The car ran reliably to finish 20th, some 34 laps down on the race winning Torana.