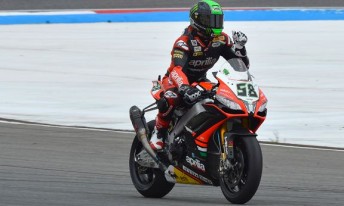 Marco Melandri and Eugene Laverty have taken a win apiece at Round 6 of the World Superbike Championship in Portugal.

Melandri came out on top in a thrilling finish to the opening encounter that saw points leader Sylvain Guintoli fall just 0.007s short of stealing the victory at the chequered flag.

The result marked the fourth smallest margin of victory in WSBK history.

Guintoli’s Aprillia team-mate Laverty endured a shocker in Race 1, failing to finish with a mechanical failure.

He made amends in Race 2, however, scoring his fourth win from 12 races this season in a dominant display.

Briton Jonathan Rea held on gallantly in the early stages of Race 2 but was eventually demoted to third by the fast finishing Guintoli.

Guintoli continues to lead the standings from Tom Sykes, who scored third in Race 1 but was unable to finish the second following a crash on the sighting lap.

Control tyre supplier Pirelli says it will investigate the issue that hampered the Italian.